BURLINGTON, MA—Woman of the Year each year is selected by an independent committee judges, who have the toughest job of choosing the Woman of the Year out of a talented pool of 20 outstanding women.

Judges on Friday chose Vision-Aid Co-Founder Revathy Ramakrishna as Woman of the Year 2019. The 17th Annual Woman of the Year Awards gala, which is organized by INDIA New England News, was held at Burlington Marriott Hotel in Burlington, MA and was attended by about 500 people. 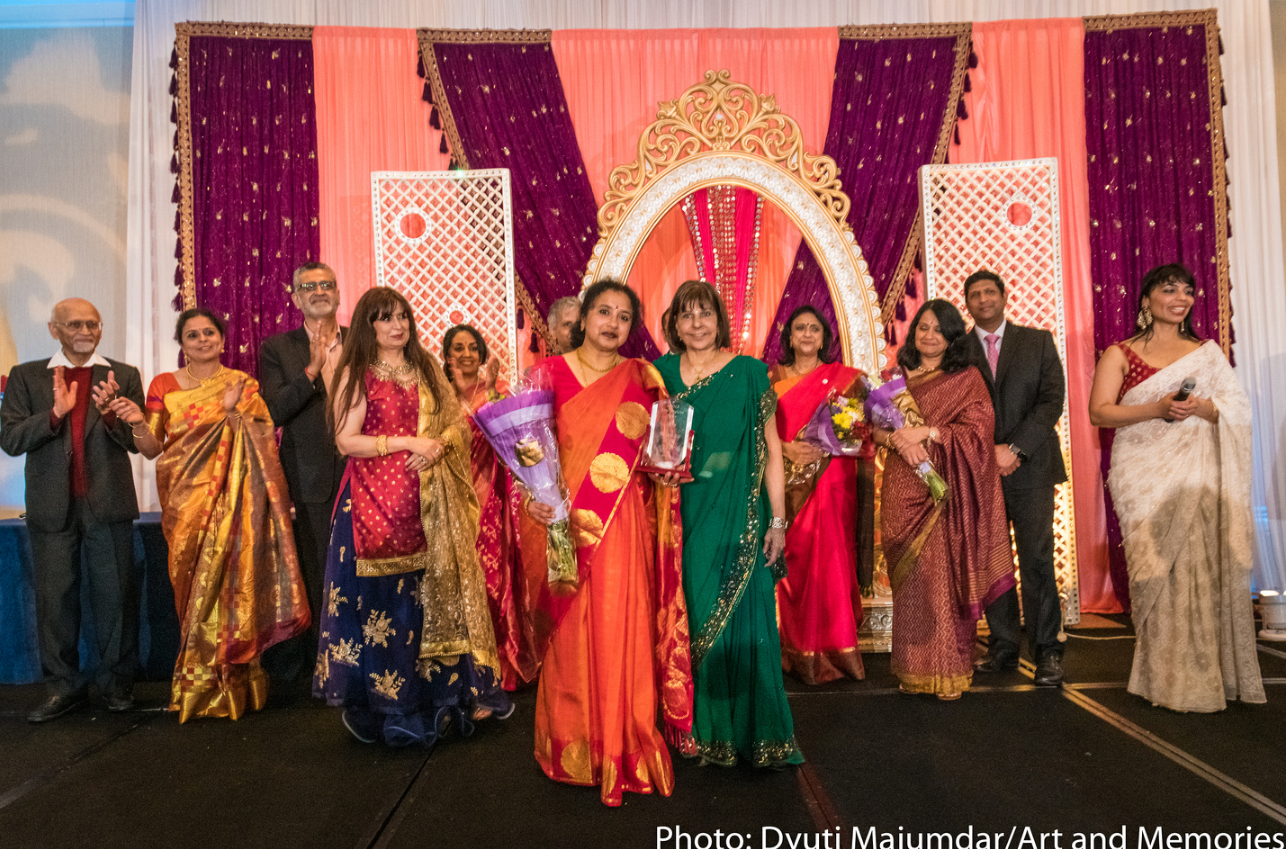 Ms. Chandra is managing partner at 3EDGE Asset Management. She has more than 25 years of senior management experience, spanning innovative startups and large financial services firms. She was most recently the President and Co-founder of TurnRight Advice Solutions, providing an online mentoring platform to professional organizations and educational institutions.  She has also held senior roles at Fidelity Investments within the firm’s retirement services and personal investing businesses, including Executive Vice President of Defined Contribution Product Development and Senior Vice President for Human Resources Strategy and Planning. Prior to Fidelity Investments, she helped co-found Harbor Software, a visual database tools company, and What-if-I Financial, a provider of online advice-based investing.

Ms. Chandra serves on the Board of Trustees of Dana-Farber Cancer Institute, Inc. and on the Board of Trustees of the Museum of Fine Arts. She is a founding member of the Council for Women of Boston College and a recipient of the 2007 Distinguished Alumni Achievement Award from Boston College’s Carroll School of Management. She is also active with the Boston chapter of TiE, the largest not-for-profit organization promoting entrepreneurship.

Ms. Desai was named Woman of the Year 2018 for her courage and resilience confronting personal adversity and displaying great persistence despite failures as she built her business. She is founder, president and CEO of Waterview Lodge, a skilled nursing and rehabilitation center in Ashland, MA.

Ms. Desai, who holds a Doctor of Science degree in Nutrition from Boston University, was recently honored by the American College of Health Care Administrators (ACHCA) with the 2018 Eli Pick Facility Leadership Award. Fewer than 11% of facilities nationwide qualify. In addition to her work, Ms. Desai supports a number of organizations: Worcester Crisis Committee Domestic Violence–being a survivor of domestic violence; Mothers Against Drunk Driving-after her 17 year old son was killed by a drunk driver in 1993; Newton Advisory Board Council on Health-to improve in public health initiatives in Newton.

Ms. Ghatraju is Quality Assurance Specialist at tech giant Raytheon, and recipient of US President’s Volunteer Service Award. Ms. Ghatraju, who was recognized for her work in 2017, also received a gold pin from the White House. This is the second time she was blessed with such honor. Previously, it was in 2013 from President Obama.

Ms. Ghatraju is also an Indian classical dancer. She founded Natyanjali in New England in 1999 with a mission to perform for charity. Since then, Ms. Ghatraju and her students have performed regularly at several nursing homes and senior centers in New England. She has 16 student arangetrams (debut) to her credit. She is affiliated to the Alagappa Performing Arts Academy (Alagappa University, Karaikudi, India) and offers Certificate, Diploma and Degree program in performing arts.  Her charity work extends to organizations from far and wide, including Vision Aid (last 10 years), Sankara Health Care Foundation, Cancer Institute Foundation, UNICEF, India Development and Relief Fund, Ekal Vidhyalaya, SAHELI, and MITHAS, We for Hope, ASHA for Education.

Prior to DB Healthcare, he founded information technology staffing and on-line exchange community business. Outside of work, Mr. Kamdar enjoys reading, writing, traveling, community work and spending time with his family. He is also an author of a unique book (on Amazon.com) – Karma Portfolio.

Ms. Palakurthi is an Indian-American singer. She serves as Chairperson of MIT’s Heritage Arts of South Asia, known as MITHAS,  and co-hosts a weekly Radio Music India show on WLYN 1360 that educates and entertains listeners on the Carnatic & Hindustani classical roots of Indian Film music.

She has recorded playback for South Indian films. Widely regarded for her versatility across vocal genres, she was the featured female singer in live shows in the USA with Kumar Sanu, Suresh Wadkar, Deepak Pandit and Bappi Lahiri.

Ms. Palakurthi recorded a duet with Hariharan for Ekal Vidyalaya. She has recently completed a Video Album with Ustad Nishat Khan of the Imdadkhani Gharana that was released early this year.

Dr. Saini is Professor of Radiology at Harvard Medical School and Vice Chairman for Finance, Mass General Hospital Imaging. He is known as the father of collaboration with offshore radiologists to provide health care in the United States.

At MGH, Dr. Saini practices abdominal radiology with an academic focus on liver imaging with CT and MR. From 2004 to 2006 he served as the Timmie Professor and Chairman of Radiology at Emory University. He is an author or coauthor of more than 300 peer-reviewed publications and three books and has lectured extensively around the world.

Mr. Tailam is an entrepreneur, investor, start-up advisor, conference speaker, mentor, and philanthropist with strong connections to TiE. He is past president of TiE Boston, and currently serves as

the vice chairman and Board of Trustees of TiE Global, an organization that oversees the growth and support the TiE chapters worldwide.

Mr. Tailam co-manages multiple dental practices in New Hampshire and Maine in partnership with Aspen Dental, a leading nationwide Dental Service Organization. He founded Redtail Consulting, a Boston area IT consulting practice, in 2006 and managed the business through 2012. Additionally, he has managed enterprise scale messaging systems for companies in the technology, banking, and insurance sectors.

Mr. Valladares is Managing Director of Berklee India Exchange. Since joining Berklee as a staff member in 2009, Mr. Valladares built capacity within the Berklee City Music Network, a network of community organizations across the United States and Canada committed to delivering high-quality contemporary music instruction to youth from underserved communities, to create a richer consortium of like-minded organizations.

He was instrumental in forming strategic partnerships with organizations and individuals dedicated to funding and sustaining music education programs. These partners include Billboard, Concord Music Group, Avid, the New York City Department of Education, and Quincy Jones, among many others.

In 2013, Mr. Valladares cofounded the Berklee India Exchange to establish a platform for cultural conversation through artist residencies and collaborations. He administers and manages artist relations and strategy, connecting the ongoing mission of the Berklee India Exchange with the progressive vision of Berklee’s leadership. Prior to joining Berklee, Mr. Valladares was a key player in the launch of Music Talent of Boston, a booking agency for the American Federation of Musicians. As the organization’s director, he recruited domestic and international artists.