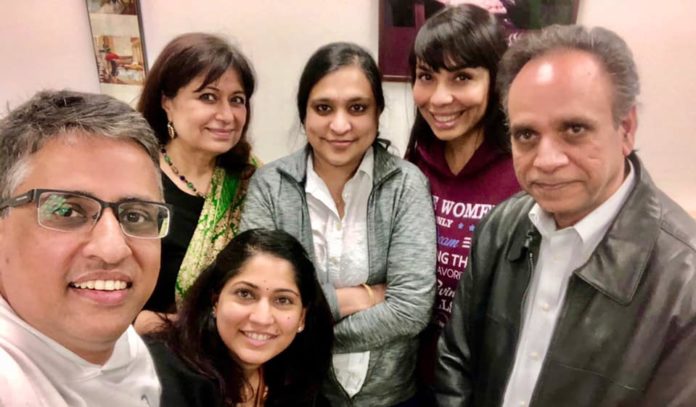 Here is the team behind this year’s NECA Awards gala, which will be held at Westin Hotel in Waltham, MA.

Ms. Chitrapu is Senior Vice-President and Executive at Bank of America. She has won awards at the bank for exceptional performance, been named to the high potential women leaders group and is the executive sponsor for the Boston chapter of the Asian Leadership Network. She serves as treasurer of DAWN (Direct Action for Women Now. Ms. Chitrapu holds an MBA from MIT Sloan School of Management.

Mr. Mishra is founder and president of the Waltham, MA-based The Mishra Group, an integrated full-service marketing and public relations firm. Since 1997, the Mishra Group has provided comprehensive, results-oriented solutions for the fast-paced new age of online and traditional marketing through the area’s best writers and editors and most talented graphic and Web designers and digital media strategists. He is also publisher of INDIA New England News, IndUS Business Journal and Boston Real Estate Times.

Ms. Pant is  the Academic Research Director at Intel, and works with leading academic researchers worldwide and technical experts to seed and drive research efforts in areas of strategic importance to Intel in particular and the computing industry in general. She has published 20+ technical papers in prestigious VLSI conferences and journals, has two issued patents and five pending patents. She is regarded as a very strong and motivating technical speaker having given numerous invited talks at various conferences and universities, including several keynote talks and distinguished lectures. She is an active proponent of STE(A) M for Women and young girls.

Anupendra Sharma is currently working on his own entrepreneurial venture while being involved with several therapeutics, medtech, diagnostics and Healthcare companies. His skills lie in company creation, spinouts, fundraising, governance, product development strategy and exits. The companies he is invested in the US and China have raised nearly $180M in venture capital and he has been involved with $16B in M&A transactions. His most recent role was Global Head of BD for Siemens Healthineers. Prior to that, for eleven years Sharma was a Senior Investment Partner at Siemens Venture Capital (SVC) in Boston, where he was responsible for leading investments in healthcare (devices, diagnostics, software and services). He previously worked in Mergers and Acquisitions for JPMorgan & Salomon Smith Barney.

Sharma founded the Startup Leadership Program, which has educated 3,500 entrepreneurs in 13 countries who have raised more than $600M; nearly 60 of these companies have been acquired. He also cofounded the Center for Entrepreneurial Leadership at BITS Pilani, and started of the Massachusetts Life Sciences Startup Initiative (MALSI) to accelerate the pace of startups in the Commonwealth, co-created and teaches the Healthcare Innovation & Commercialization course at Harvard Medical School and serves a mentor, reviewer or judge for many grants and business plan competitions including Cornell, BITS Conquest, Harvard President Challenge, MassChallenge, Mass Life Sciences, MIT 50K and the National Cancer Institute at the National Institutes of Health.

Dr. Sheth, a Board Certified Internist with keen interest in women’s health, is co-producer of NECA Awards and co-founder of INE Multimedia, a Waltham, MA-based (501c-3) non-profit organization devoted to promoting and supporting charitable organizations, art, culture, education and empowerment through workshops, seminars and multimedia. She works at Beth Israel Lahey Health. She was voted in the 150 ‘Women of Influence’ by YW of Boston in 2016. Dr. Sheth served as president of Indian Medical Association of New England in 2013. She has been a big advocate for empowerment of women and has been voted Woman of the year in 2011. Dr. Sheth is the creator and host of the popular “Chai with Manju” celebrity interview series as well as “Dreamcatchers”  featuring people from the local community who have made their dreams a reality.

Ms. Taylor is president of the India Association of Greater Boston and serves as Chief Risk Officer of MFS Investment Management. Previously, she was is a Principal with Deloitte & Touche LLP’s Risk Advisory practice where she serves as a leader in the firm’s Life Sciences practice leading variety of engagements related to governance, ethics and compliance, risk and controls.

She holds a BA Economics from University of Mumbai and a MBA from Bentley University, Waltham, MA. Ms. Taylor, who was named an emerging leader by the Boston Business Journal, is active in the New England cultural community.

A stage and theater performer since the early age of 4, Taylor continues to nurture her passion for the cultural and performing arts and often directs, produces and performs in large musical and theater productions with participants of many ages.