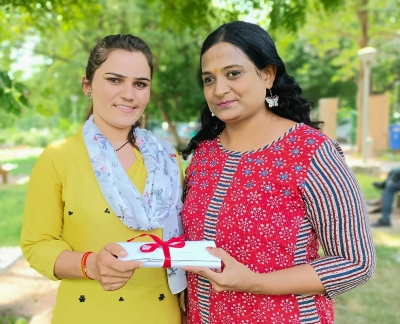 21-year-old Rekha, a resident of Jodhpur, was caught in the clutches of child marriage with a youth resident of a village in same town in 2002. Rekha was only one year old at the time of child marriage. Her in-laws pressurised her for the ritual Gauna and to send her to in-laws house a few years back. Due to which Rekha’s dream of becoming an ANM (nurse) shattered and she fell into depression. On the other hand, the in-laws put the pressure of a caste penalty of up to Rs 10 lakh on Rekha and her family.

Meanwhile, Rekha came to know about the campaign of annulment of child marriage of Kirti, who is a famous activist and included into the list of BBC 100 Inspirational Women. Rekha, with the help of Dr. Kriti Bharti of Saarthi Trust, filed a case in Jodhpur Family Court for annulment of her child marriage. On the other hand, she motivated Rekha to take admission in ANM course.

Meanwhile, Kriti says, “Rekha got the gift of annulment of child marriage on her birthday. Now after the cancellation of her child marriage, her dream of becoming an ANM will be fulfilled. Efforts are being made for her better rehabilitation.” (IANS)