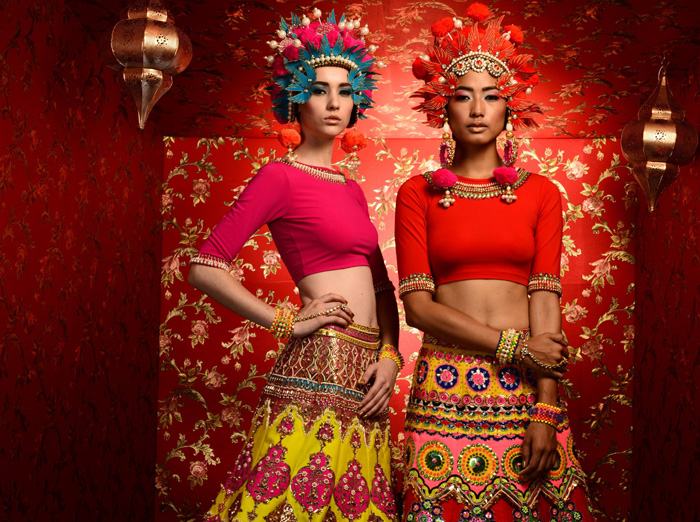 Known for working with a riot of colours, psychedelic prints and for producing kitschy designs that have been loved the world over — sitarist Anoushka Shankar flaunted his creation at the 58th Grammy Awards ceremony — Arora has been in the designing profession for over 15 years.

Expressing his joy on the honour, Arora told IANS: “I am quite happy that the French could recognise somebody from India for this level in the field of fashion.

“I am the first Indian ever in the world of fashion and art to receive something like this and I am very happy. I hope that the Indian government should now recognise fashion as the form of art like the way French do.”

Arora, who runs the Indian by Manish Arora brand, feels that the Indian government lacks when it comes to giving recognition to the fashion industry.

“Starting with the basic of the government’s recognising fashion as serious business and then having specialised people who understand fashion to be involved in the government to make changes… Also, fashion designers are rarely recognised in any kind of ceremonies or awards in India. I think this needs to be changed,” he added.

With a steady international clientele that makes it a point to visit his stall at national fashion weeks, Arora’s international presence started with his successful debut at the London Fashion Week in September 2005. He later showed his creative prowess at platforms in Hong Kong and Miami.

In 2007, he showcased for the first time in Paris Fashion Week, eventually becoming a member of the distinguished French Federation of Pret-a-Porter in the same year. Now the Chevalier de la Légion d’Honneur is another feather to his cap.

Looking back at his journey, Arora, whose connect with France was also strengthened by his appointment as the creative director for iconic French fashion house Paco Robanne in 2011, said: “I always think that it’s just a beginning.”

“I never feel that I am working. I am one of those who is following his dreams in the form of a job. Not everybody in the world gets the chance to follow their dreams, and I am glad I found my belongings… I feel as if I am on holiday.”

However, being among the first Indians to show internationally had its own pros and cons when he had started, Arora said.

“Starting in London, and then in Paris, was not that easy for me because you never had anybody else to take as an example. You had to make your own path, which comes with making a lot of mistakes, but then it also makes you more original and real because you have nobody else to look up to. So I am very glad with how my career shaped up,” said Arora, whose designs are flaunted by the likes of international fashion icons like Lady Gaga, Katy Perry, and Nicki Minaj.

While he is happy with the evolution of the Indian fashion industry on the global map, he feels the country’s designers still have a long way to go. A solution, he said, lies in the fact that “it is great to use India but you need to modernise India”.

“You don’t need to westernise, but you need to modernise India and Indian techniques of weaving or textiles to be at par with international level,” added the designer, who has even worked in collaboration with brands such as Walt Disney, Swarvoski, Swatch, Reebok, Barbie, Mono Prix, Nespresso, Nivea, MAC Cosmetics, Pommery and Amrapali among others.