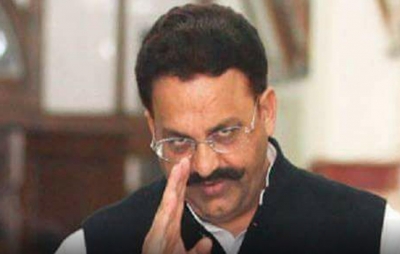 Banda (Uttar Pradesh)—After an arduous journey of more than 14 and a half hours, mafia don and BSP MLA Mukhtar Ansari was brought to Banda jail on Wednesday morning.

The convoy bringing Mukhtar reached Banda around 4.30 a.m. and the ambulance carrying the don and three vehicles with senior police officials entered the jail premises.

Vehicles belong to media houses that had been tailing the convoy were stopped at a distance from the jail.

The high voltage drama in bringing Ansari from Ropar in Punjab to Banda in Uttar Pradesh finally ended with the safe shifting of the don to Uttar Pradesh.

Immediately after he was brought to Banda jail, a team of four doctors medically examined him and he was then shifted to the barrack.

Official sources said that the panel of four doctors has been asked to remain on call by the Banda jail.

Earlier, the convoy bringing the don from Punjab was briefly stopped on Tuesday evening at Jewar for refueling and then again at Agra, for change of drivers.

Chief Minister Yogi Adityanath, held a late-night meeting with senior officials to monitor the transfer of the accused which was done under full media glare.

The transfer of Ansari to the UP jail, meanwhile, is being touted as a major victory for the Yogi Adityanath government which has embarked on ‘Mission Mukhtar’ when it began a crackdown in May 2020 against Ansari and his gang.

According to the UP police, Ansari faces 52 cases in the state and elsewhere, and 15 of them are at the trial stage.

The police have, till now, arrested 96 criminals and seized, freed, or demolished property worth Rs 192 crore linked to the BSP MLA and his associates.

Ansari is also the prime accused in the 2005 murder of BJP legislator Krishnanand Rai.

Seventy-two arms licenses linked to him and his accomplices had been suspended and an extortion racket that fed crores of rupees yearly to Ansari and his associates was busted.

The transfer of Mukhtar Ansari had taken a political turn last month when the Yogi Adityanath government told the Supreme Court that the Punjab government was “shamelessly protecting” the legislator by not handing over his custody to face trial “in 10 heinous cases of murder, extortion, cheating, fraud” and “gangster acts” in the special court for MPs and MLAs in Allahabad.

UP BJP MLA Alka Rai, wife of former legislator Krishnanand Rai who was murdered in 2005, had also been sending letters to Congress General Secretary Priyanka Gandhi Vadra, accusing the Congress government in Punjab of helping Ansari, an accused in the murder of her husband in evading court appearances in UP.

A senior official who spoke to IANS on condition of anonymity, said, “For Mukhtar Ansari, Ropar jail may have been a reformatory but Banda jail will be a jail in the true sense of the term. We will make sure that he gets no extra facilities except those he is entitled to.” (IANS)