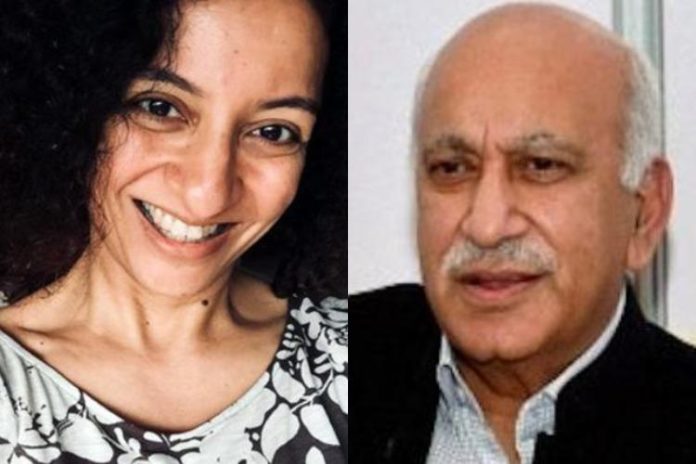 New Delhi–Journalist Priya Ramani on Saturday said she used the word “predator” to emphasise the difference in age, influence and power between herself and M.J. Akbar, while recording her statement as a witness before a Delhi court in the defamation complaint filed against her by the former Union minister.

“I was a young journalist, he was a famous editor, 20 years older to me, who called me to his bedroom for a job interview. A predator is more powerful than his prey. I used the word ‘predator’ in the context of my personal experience with Mr Akbar and the shared experience of many others,” said Ramani while testifying before Additional Chief Metropolitan Magistrate Samar Vishal.

Explaining her comment that “he didn’t ‘do’ anything” in her tweet referring to Akbar, she said, “By saying that he didn’t ‘do’ anything, I was honestly disclosing that there was no overt act but that didn’t excuse Mr Akbar’s sexually coloured behaviour. Over the years, my colleagues have shared their significantly worse stories of their experiences with Mr Akbar. My tweet was to highlight the fact that we normalize sexual misconduct and unless it results in physical assult, we do not take it seriously.”

Continuing her statement, Ramani said, “On October 14, 2018, I found out through media reports that Mr Akbar had returned from his foreign tour. By this time, more than 12 women had spoken up about Mr Akbar…I read that Mr Akbar had handed in his resignation and hence I tweeted this. Later on, the news turned out to be false and Mr Akbar resigned a few days later. Next day, the Bruhan Mumbai Union of Journalists and the Network of Women in Media wrote a statement addressed to the President and Prime Minister supporting me.”

The court was hearing a criminal defamation complaint filed by Akbar against the journalist for accusing him of sexual misconduct.

Following the allegations, Akbar, the then Minister for State (MoS) for External Affairs, had to quit the post. (IANS)