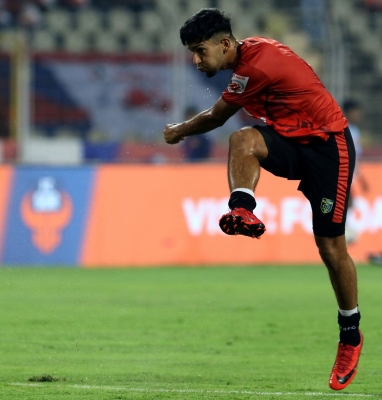 New Delhi– A historic second successive qualification for the AFC Asian Cup has made Sahal Abdul Samad confident of the Indian national football team ushering in a ‘new golden era’.

The midfielder is assured in playing a major part in it as India qualified for the Asian Cup in style having beaten all three opponents in their group in the third and final round of qualifiers in Kolkata.

“I am still young and I really look forward to being a part of Indian football’s golden era now. I am really happy about how we have been approaching the matches,” Sahal said.

India defeated Cambodia and Afghanistan before thrashing Hong Kong 4-0 on its road to the Asian Cup, where India will now aim to take the next step in hopefully progressing out of the group stages.

Sahal felt the upcoming extended domestic season in Indian football will serve as a cornerstone in preparation for the Asian Cup which is scheduled for 2023.

“As players, we all need game time. The longer the season is, the better a player gets. That gets you into the rhythm for football,” Sahal commented.

From the 2022-23 season onwards, the Indian football calendar will be expanded to nine months, starting off with the Durand Cup in August with the Indian Super League and I-League beginning in October and culminating with the Super Cup in May 2023.

Apart from Sunil Chhetri, Manvir Singh, Ishan Pandita, and Anwar Ali scored for India against Hong Kong on Tuesday. Defender Anwar, who resumed his football career in August last year after a two-year hiatus owing to a heart condition, got his debut goal for the senior national team, in only his sixth appearance.

“I am very happy scoring my first goal for the country. It was a team game and the credit goes to everyone involved,” said the 21-year-old Anwar, who was part of India’s team in the 2017 FIFA U-17 World Cup. (IANS)