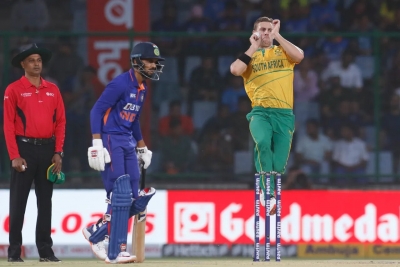 Rajkot– Tearaway South Africa quick Anrich Nortje conceded that he is still some way away from being at his 100%, saying that he is still finding “one or two things” to get back to his best bowling self before persistent injuries to his back and hip that kept him out of cricketing action for nearly five months after Men’s T20 World Cup in the UAE last year.

Nortje made his competitive cricket comeback by turning out for Delhi Capitals in the franchise’s third match of IPL 2022. Then, it took him nearly a month to play his next match and become a regular feature in Delhi’s playing eleven.

“No, not yet. I am still working on it, still trying to find one or two things, and body-wise also I am not 100% yet there where I want to be. It’s just about slowly increasing and slowly building it up. I would probably rate myself from where I was last year in the IPL and at the start of the World Cup, so still trying to get there,” said Nortje on the eve of fourth T20I at Rajkot.

“Some of the bowling is limited, you can’t always just go out and bowl eight or nine overs in a day. It’s been very limited. But so far it has been a good challenge. It’s something that will help me a lot if there are any other niggles or injuries going forward. But it has been a long time and some important things to remember and take out of this,” added Nortje.

Asked what are the things he is missing from being his best bowling self, Nortje remarked, “If I knew exactly what it was, I would have done it. So it’s just going to be a small, minor adjustment. I generally keep it very simple, stick to the basics and adjust. I am working on something at this stage and will see how it goes. Hopefully, I am on the right path. It’s not like it’s completely out of shape. It’s just small margins for me and it’s something I would like to get back to what I was.”

South Africa enter the match at Saurashtra Cricket Association Stadium after being unable to seal the series at Visakhapatnam, losing by 48 runs. Friday’s match presents them a chance to turn their 2-1 scoreline into an unassailable one.

“I said at the last game as well that this was sort of like a final for us. We obviously didn’t perform well or anything to what we are capable of in the last game. So, this would probably be like a final again for us. It’s a second chance but we need to seal the series as soon as possible and not give them an opportunity or any sniff, that’s the main goal of this series as well,” stated Nortje.

Nortje signed off by saying that the Proteas are still undecided over the playing status of wicketkeeper-opener Quinton de Kock, who sat out of matches at Cuttack and Visakhapatnam due to wrist injury. In his absence, Reeza Hendricks has been opening the batting alongside captain Temba Bavuma.

“I am not too sure and will need to find out tomorrow. It’s good to see that he’s practising and did some fitness test today. Maybe the team will take a call tonight or tomorrow morning.” (IANS)