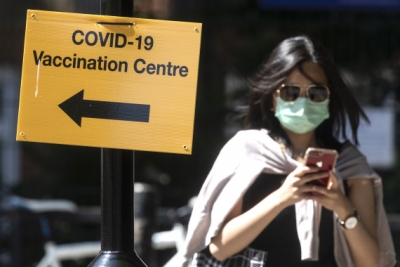 London– Although the UK has witnessed a sharp decline in coronavirus vaccine hesitancy, London still remains the most vaccine resistance area of the country, a survey by the Office for National Statistics (ONS) revealed.

In the survey released on Monday, the ONS said adults from all regions of England, Scotland and Wales became less likely to report coronavirus vaccine hesitancy during the first half of 2021, but in London, the hesitancy level fell from 11 per cent to 7 per cent, reports Xinhua news agency.

“Despite the fall, Londoners remained the most vaccine hesitant among the regions and countries of Britain,” said the ONS.

London also appears to be behind other regions on vaccine uptake, it added.

At the end of June 2021, one in nine (11 per cent) adults aged 50 years and over in London had not received a coronavirus vaccine, twice the rate of any other English region.

The sharpest decline in hesitancy was in Wales where the rate decreased from 9 per cent in March to 4 per cent in July.

In Yorkshire and the Humber region of England the number halved to 4 per cent, while in north east England it fell from 7 per cent to just 3 per cent.

The ONS said in some regions of Britain, people in bad health became less likely to report vaccine hesitancy than those in good health.

“In line with trends observed across Britain as a whole, young adults, those of Black or Black British ethnicity, and the unemployed are generally the most hesitant towards vaccines in all English regions, Scotland and Wales,” said a spokesperson for ONS.

“Rates of hesitancy among these groups tended to be highest in London and the Midlands, despite falling compared with earlier in the year,” said the spokesperson.

Nearly 90 per cent of the adults in Britain have had their first dose of vaccine, while more than 74 per cent have had their second jab, according to the latest figures. (IANS)