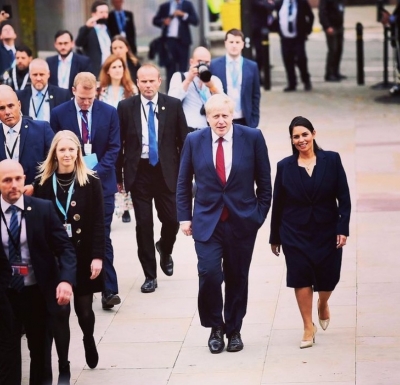 London– The London High Court has ruled against a petition filed by a trade union of senior civil servants for a judicial review of British Prime Minister Boris Johnson’s decision to overrule an independent investigation, which found Priti Patel, the Indian origin Home Secretary in his cabinet, guilty of “bullying” (read as wanting things done against the rules), which is a sackable offence under the ministerial code.

The FDA Union filed the case against the fact that Johnson had gone against the conclusion reached by Sir Alex Allan, then his independent adviser on ministerial standards, to protect Patel.

The two-judge bench said: “The question for this court is whether the Prime Minister proceeded on the basis that conduct would fall within the description of bullying with paragraph 1.2 of the ministerial code if the person concerned was unaware of, or did not intend, the harm or offence caused.”

It added: “Reading the statement (made by Johnson at the time) as a whole, and in context, we do not consider that the Prime Minister misdirected himself in that way.”

In November last year, Sir Alex found that Patel had not always treated civil servants with “consideration and respect”.

He went on to say in his report to Johnson: “Her approach on occasions has amounted to behaviour that can be described as bullying in terms of the impact felt by the individuals. To that extent, her behaviour has been in breach of the ministerial code, even if unintentionally.”

The Prime Minister is the final arbiter on such complaints. His interpretation was that Patel was “unaware” of the disquiet she had caused. And that he had received an assurance from her that she was “sorry for inadvertently upsetting those with whom she was working”.

This, though, was not the first time that Patel had been accused of bullying and had forced the government to pay out cash compensation for the injury inflicted.

Sir Alex had resigned after Johnson did not take action on his inference.

The FDA stated: “The court has determined that the Prime Minister did not acquit the Home Secretary of bullying, and that he did not reject the findings of Sir Alex Allan that her conduct amounted to bullying.” (IANS)