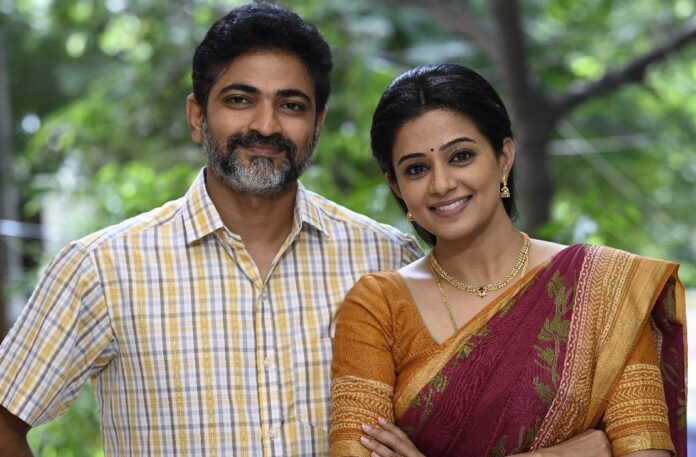 While Pradeep is working with Priyamani for the first time in this movie, his admiration for the actress dates back to his college days. “I remember watching ‘Yamadonga’ ‘Paruthi Veeran’, for which she won a National Award, and then in Mani Ratnam’s ‘Raavanan’. Each of her roles are so versatile and she portrays emotions realistically on screen. I am also consciously choosing my roles in such a manner that I get to play a variety of characters in the films I do,” Rudra explains.

After playing a straight-jacketed cop in Nagarjuna-starrer ‘Wild Dog’, and his more recent role as the publisher in ‘Shyam Singha Roy’ which aired on Netflix, Pradeep now plays a simple middle-class man who works as an engineer. “My character is a regular guy next door who likes to do his work and spend time with his family but my wife Anupama, played by Priyamani, is a live wire. She is always gossiping and meddling in every neighbours’ lives in the society and while doing so gets into trouble. And then reluctantly I have to get involved to save her from embarrassment.”

Pradeep also confides that he and Priyamani connected instantly over their love for dogs.

He says, “Priyamani and I both have pets and though we met for the first time on set, we bonded quickly over our mutual love for pets. She even mentioned that she would work in a dog movie for free after she had fun working with her handsome co-star labrador named Rocky in Kannada movie ‘Nanna Prakara’. We would even feed the stray dogs on set sometimes. I have a Golden Retriever and Priyamani’s pet Mocha is like her child.”

A consultant and entrepreneur Pradeep Rudra grew up in Kurnool, Andhra Pradesh, and lived in Australia before moving back to Hyderabad to start his fitness business F45 Fitness where he trained several celebrities well.

‘Bhamakalapam’ happens to be Pradeep’s fourth movie to be released on an OTT platform after ‘Wild Dog’, ‘Ksheera Saagara Madhanam”, and ‘Shyam Singha Roy’. The actor says, “While I love a big release in theater and look forward to it, the amount of love I have been showered from non-Telugu, Tamil speaking audience because of the dubbed versions reaching a wider audience on OTT platforms is unparalleled. I have been getting calls from Hindi as well as other language casting directors as well.”

Prior to ‘Shyam Singha Roy’ and ‘Wild Dog’, Pradeep has acted in ZEE5 Telugu web series titled ‘God’ alongside Satyadev and Chandni directed by Aneesh Kuruvilla. He also worked on Krish’s project ‘Mastee’ alongside Navdeep on Aha Network.

Pradeep will next be seen in Adivi Sesh’s ‘Major’. (IANS)