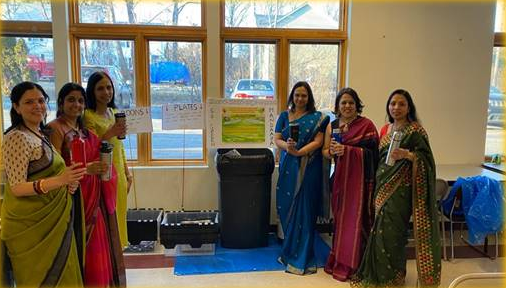 Until recently we had been reading everywhere the colossal environmental disaster humans are causing because of the plastic usage in every walk of life. Environmental/climate friendly individuals are taking steps to minimize the plastic footprint that they are leaving in their daily activities.

In Indian homes, customarily stainless-steel plates, glasses, spoons are used, washed and reused for generations. However, when it comes to a public event having a big gathering, plastic plates, glasses or spoons are still being used for convenience. There are attempts to use bio-degradable options here and there but for various reasons it has not caught the wider acceptance that it deserves.

It is in this context, the all-women Executive Committee (EC) team of Mandaara-New England Kannada Koota (NEKK) took a remarkable step in a recently concluded public event, Dasa Vachana Day: to do the same – that we do at home – outside in a much larger scale!

The EC under the banner of NEKK’s charity wing, Seva Mandaara, came up with this idea of “Plastic Purge – Old Ways Surge” and implemented it for the first time on their Dasa Vachana Day at Chinmaya Mission, Andover. More than 300 people had breakfast and lunch – all without using a single plastic item. Volunteers were there to give instructions to the attendees particularly to guide through the “after-use” steps. Thanks to the enthusiastic supportive participation by everyone involved, the first large gathering event, where “single-use” items were taboo, concluded successfully. 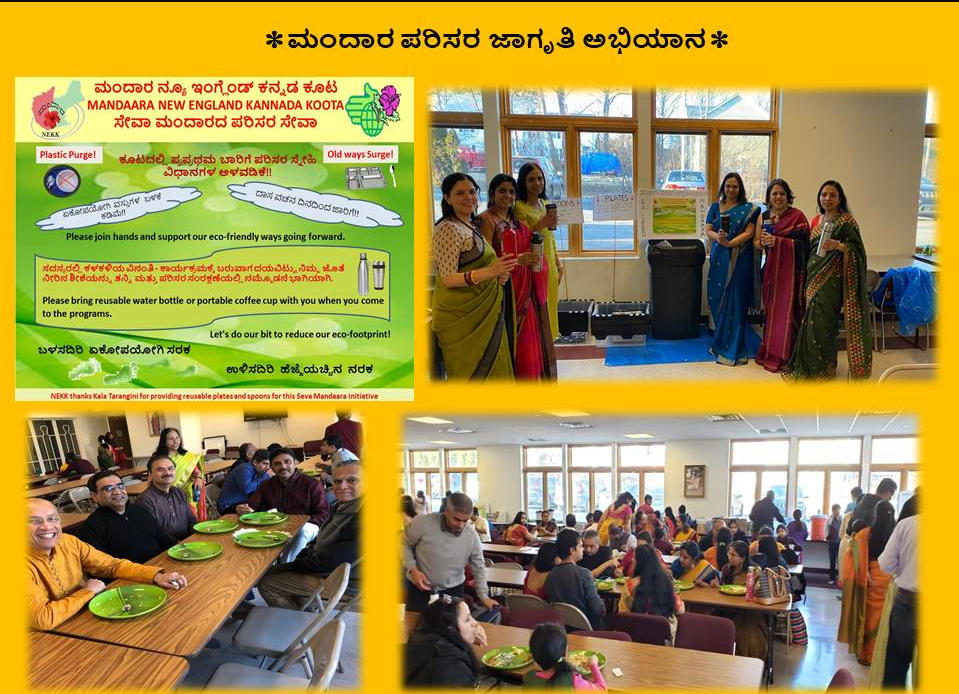 Preparations for this process were started much earlier though. 300 special banana-leaf looking plates made in Rajasthan and additional compartment stainless-steel plates and spoons were procured from India by Kala Tarangini (KT)*. It took about eight 23-kg bags to pack these and KT had to approach quite a few friends who were travelling back from Bangalore to Boston to see if they could bring one or two of these bags. Everyone they approached liked the idea and gladly agreed to bring a bag or two. Thus, within three weeks all the eight bags were in Boston – free of cost – of course!

Next major step was to prepare the participants for the change. For this, requests were made to all the members to be a partner in the process through various media – email, WhatsApp, Facebook, and the website. Word-of-mouth canvassing also was adopted.

The solicitations made both in Kannada and English looked like: “Please join hands with us and support our Seva Mandaara’s eco-friendly initiative going forward. Along with recycling which has been already implemented, we have decided to replace single-use utensils with reusable products as well as avoid plastic usage in our next programs. We would like to compost the food waste as well. In order to do that, we ask you to wipe your plate clean with paper napkin and separate food waste before piling the plates for cleaning. Our Seva Mandaara volunteers will assist you with instructions at the venue. We request that you bring reusable water bottle with you when you come to the Koota program as well. If you bring portable coffee cup that can double as water cup, that is even better. Let’s do our bit to reduce our eco-footprint!”

On the day of the event, people were initially skeptical, but they quickly adapted to the process enthusiastically without much hassle. Different placards were in place particularly directing what needs to be done with the used plates, spoons etc. Every one put the food waste, if any, into food waste containers and then wiped the plate with Clorox wipes before placing the plate in the plate containers. Spoons were collected in a separate spoon container. All these containers were kept on a plastic sheet to avoid any food particle accidentally spilling out and making mess on the floor.

The biggest challenge was of course the post-event cleaning! Some pre-identified volunteers took one or two containers having soiled plates home in their cars and cleaned them with great pride and fun. In some instances, even the youths at home joined in the chore such as wiping the water off of the washed plates. At the end of the day, 350 plates were washed in five different houses!

Such an undertaking at this scale can only be executed if everyone in the community participates with similar zeal and passion. That there was no dearth of it was evident in the success of “green initiative” program. Mandaara thanks everyone involved and feels encouraged to undertake more of such initiatives by the kind of feedbacks it received:

(Plates and spoons were procured by Usha Rao, Treasurer of NEKK, for a charity organization she runs called Kala Tarangini. NEKK thanks Kala Tarangini for lending these items for the former’s Go-Green initiative.)