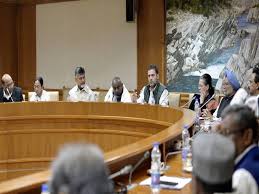 New Delhi– Senior leaders of 21 opposition parties including the Congress, Trinamool Congress, TDP, AAP, NCP and the DMK met here on Monday and resolved to work together to “defeat the BJP-RSS” and to expose the ruling party’s “corruption”.

The leaders, who included UPA Chairperson Sonia Gandhi, Congress President Rahul Gandhi, former Prime Ministers Manmohan Singh and H.D. Deve Gowda, Chief Ministers Mamata Banerjee, N. Chandrababu Naidu and Arvind Kejriwal, NCP leader Sharad Pawar and DMK leader M.K. Stalin, did not specifically talk of a grand alliance for the 2019 Lok Sabha polls but said they will come out over the next few months with “a programme of work” anchored in complete transparency and accountability.

The meeting, which took place a day before the start of the winter session and before the results of assembly polls in five states, was not attended by the Bahujan Samaj Party and the Samajwadi Party.

In a joint statement later, the “leaders of secular parties” reaffirmed their steadfast resolve to “confront and defeat the forces that are subverting our Constitution and making a mockery of our democracy”.

They talked of electronic voting machines (EVMs) and said “innumerable deficiencies, failures and plausible doubts” on their neutral functioning have raised “a question on the neutrality of poll process itself” and this needs to be redressed without question and without delay.

“It is in the interests of safeguarding and strengthening our constitutional republic and people’s livelihood that this Rashtriya Swayamsevak Sangh (RSS)/ Bharatiya Janata Party (BJP) government is ousted,” the statement said.

The groundwork for the meeting had been done by TDP chief and Andhra Pradesh Chief Minister Chandrababu Naidu, who had left the ruling National Democratic Alliance earlier this year. He has been meeting leaders of various parties to bring them together against the BJP-led NDA in the 2019 Lok Sabha polls. Similar efforts have been made in Trinamool Congress leader and West Bengal Chief Minister Mamata Banerjee in the past.

The leaders accused the Narendra Modi government of trying to put “a conspiratorial lid over multiple corruption scams” like Rafale and becoming “an abettor to the escape of bank defaulters”.

The meeting was informed in-between that Reserve Bank of India (RBI) Governor Urjit Patel had resigned and the leaders accused the government of a “sinister attack on the autonomy of RBI”.

“We deprecate the systematic attack by the government on India’s economy through a select band of government nominees arbitrarily dictating the monitory policies and compromising RBI’s institutional integrity,” the statement said.

The leaders said there is need to banish the current all-pervasive atmosphere of fear and intimidation and called upon liberal, progressive forces to join them in their battle to save the Constitution.

They accused the Modi government of benefiting crony capitalists and re-imagining the past.

Gandhi later told reporters that there was “consensus that BJP’s corruption in Rafale, demonetisation and other areas is simply not acceptable and we are going to fight it and do whatever we can to expose it”. There was a consensus that we are going to work together to defeat the BJP-RSS combination, he added. (IANS)