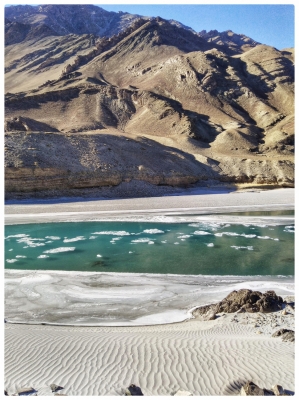 New Delhi/Leh– Two years after it was separated from the parent state of Jammu and Kashmir and granted the Union Territory status, Ladakh is on crossroads over choosing between sustainable tourism and saving the fragile trans-Himalayan ecology.

Tourism has been steadily increasing in Ladakh over last few decades and with every passing year, created an unviable strain on the local natural resources. While on the one hand, people want more tourists to come; on the other, environmental experts are wary of negative impact it will have on the local environment.

A few days ago, when a video of a reckless tourist’s four-wheeler stuck in the sludge at the shore of the serene Pangong Tso lake went viral on social media, there was a lot of hue and cry from all strata of people from Ladakh, in person, in media and also on the social media.

“Ladakh has some beautiful high-altitude lakes, which are not only home to several wildlife but also has rich traditional values and sacredness. Enjoy the peaceful awe-inspiring lakes but please don’t pollute them,” president of the International Association for Ladakh Studies and Founder of the Himalayan Cultural Heritage Foundation Sonam Wangchok had tweeted.

With its nature’s bounty, Ladakh attracts large number of tourists and the numbers of have been increasing by the year. Apart from backpackers and regular tourists, Ladakh has attracted bikers from all across India and the world.

On Wednesday, the Border Roads Organisation (BRO) opened the highest motorable road in the world at 19,300 feet at UmlingLa Pass in eastern Ladakh, which is set to attract more and more bikers who were attracted earlier to the 18,000+ feet of the Khardungla Pass. This development, many fear, would bring on more tourists, especially the bikers. Pre-lockdown, there were more than 2.7 lakh tourists to this vastly beautiful cold desert.

Just like the viral video about the fancy SUV stuck in the lake shore, another video of a bunch of bikers kicking the sand dunes in remote Ladakh too drew lot of criticism.

“Sand dunes are an independent eco-system. There are ground nesting birds, there are lizards, there are scores of insects and other species that are found in the sand dunes of Ladakh. Once the balance is disturbed, ecological process is disturbed and it can have an impact on the eco-system services,” Snow Leopard Conservancy India Trust’s Tsewang Namgail said.

Therefore, he said, it is imperative that both locals and tourists need to understand the fragile ecosystem and need to respect the environmental fabric.

And then there are others who equally blame the local administration’s inefficiency. “It is my sincere request to all tourists visiting Ladakh. Respect the beauty, respect the ecosystem, respect the people. Yes. However, I’d also like to add that the authorities in Ladakh have to do a much better job of enforcing the rules,” said Rinchen Norbu Shakspo, a journalist from Ladakh, now based in Bengaluru.

Ladakh generally witnesses domestic tourists in May and June with little less in July each year. Last year saw a stop due to the lockdown but this year, the tourists are back with a vengeance. “Plus, this year, several people from north-west India have parked themselves off Ladakh due to work-from-home system,” pointed out social worker Fariha Yusuf.

Yusuf is with the Ladakh Ecological Development Group (LEDeG) that has carried out cleanliness awareness drive regularly along with the administration and also encouraged the administration to compulsorily enforce ‘segregation at source’ for the municipal solid waste. “Fortunately, the hotels and other local people are complying pretty well. We have also started cleaning the landfill site which is overflowing with all the years’ of waste. It will take time but at least, a start has been made,” Yusuf added.

The change is slow but beginning to happen. On the occasion of celebration of the second anniversary of the formation of Union Territory of Ladakh, the Ladakh Tourism department launched e-bus and also conducted a ‘sustainable cleanliness drive’ at Skara Spang, a meadow in the neighbourhood of Leh.

While both the initiatives earned good words for the administration, there are concerns raised for the overall changes happening since last two years. With so much of infrastructure planned, concerns are raised towards the processes that will ensure environmental due diligence. For instance, Namgail pointed out to a certain Environment Impact Assessment (EIA) report prepared for a road building project in Ladakh.

“One of the EIA reports I saw mentioned, ‘There are no trees in the area, so we can go ahead with the project’. This shows a clear lack of understanding about the ecology here,” Namgail said.

Environmentalist Karma Sonam pointed out how the status of UT is being problematic for better environmental administration.

“The Ladakh Autonomous Hill Development Council is now a powerless body, and all the decisions are taken at the central level. Tourism has been increasing over the years but now it is time to put a check as excessive tourism can be a problem for environment,” he told IANS on phone.

From being part of a large state to being a Union Territory and then from demanding Schedule Six status to now demanding separate state, Ladakh and Ladakhis have come a long way. Time for this old silk route destination to find its own place again! (IANS)