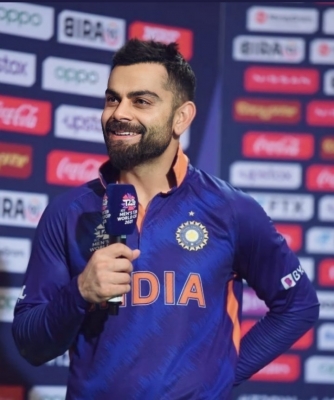 Mumbai– Former Australian skipper Ricky Ponting has said that India batting stalwart Virat Kohli will have to find a solution to his batting woes himself, adding that given the “absolute professional” that he is, the former captain “work it out pretty quickly”.

“There was a lot of talk and conjecture around the IPL about how tired and burnt out he (Kohli) might be. That’s for him to work out and assess and find ways to improve, whether it’s a technical thing or a mental thing. I’m sure, being the absolute professional that he is, that he’ll work it out and work it out pretty quickly,” said Ponting in IANS Review.

“So that might be exactly where Virat Kohli is at now, but I’m pretty sure he won’t stay down for too long,” said Pointing.

With Dinesh Karthik finding his form in the Indian Premier League and returning to the India fold riding on his performance for Royal Challengers Bangalore, Ponting felt the wicketkeeper-batter was superb in the death overs, and he should be used in the T20 World Cup campaign.

Karthik scored 330 runs at a strike-rate of more than 183 in the IPL 2022 season. The 37-year-old’s form has raised calls for him to be included in India’s T20 World Cup squad, and Ponting is all for it.

“I would have him, and I’d have him in at that five or six role,” he said. “The way that he finished games for RCB this year, he took his game to another level.

“When you look at the IPL, you want your better players to maybe be able to win two or three, maybe four games through the season. If you can get that out of them, it’s probably going to be a really good return. But Dinesh probably had a bigger impact on a lot of the games than most of the other RCB players did this year.

“Virat (Kohli) having the year he’s had, Maxi (Glenn Maxwell) started the tournament really well… but DK was the one. And Faf (du Plessis) too I guess, who kept the RCB bandwagon rolling. I’d be surprised if he’s not in there (India) line-up somewhere.” (IANS)