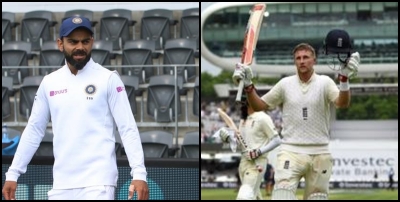 New Delhi– India captain Virat Kohli and his England counterpart Joe Root are beset by different challenges as the four-Test series between the two teams gets underway in just over a week’s time.

Kohli has to prove himself as captain all over again after Ajinkya Rahane led India to a Test series win in Australia. India lost the first Test at Adelaide under Kohli’s leadership after which they bounced back to win two out of the remaining three Tests under Rahane.

Root, on the other hand, is firmly ensconced in his captaincy seat. His performance in Sri Lanka, where he racked up 426 runs at an average of 106.5, saw him lead the team to a 2-0 win in the two-Test series by example.

England batsman and opener Rory Burns said that Root leads from the front and the way he batted was a lesson.

“He leads from the front, you have just seen from this Test series. Some of the highlights or sessions I saw, it was pretty incredible to see him go about his business. Leader by example. Easy bloke to follow,” said Burns who had missed the tour of Sri Lanka but will open in India.

However, unlike Kohli, who will lead a settled batting unit at home, Root may have to take the burden of scoring on himself as the England top three is inexperienced in these conditions and isn’t settled as yet.

England are also following a rotation policy as a result of which Jonny Bairstow returned home after the series in Sri Lanka and will not be available for the first two Tests.

Former England captain Nasser Hussain had asked the England and Wales Cricket Board (ECB) to rethink the decision while pointing out that Root, Bairstow and Ben Stokes are the three best players of spin bowling in England camp.

He praised Root especially while pointing out his technical correctness while playing spin bowling. Hussain said that Root doesn’t end up playing across the line like Zak Crawley and Dominic Sibley do.

With such issues in batting, the pressure on Root will be immense even though he doesn’t have to worry much about his captaincy. A series loss in India won’t result in him getting axed.

Kohli, on the other hand, is favourite to win the four-Test series as India are playing at home and have a team that is high on confidence after beating Australia in Australia.

The India skipper won’t just have to perform with the bat but also lead the team well.

There are already calls for him to be replaced. A series loss or even a drawn series will raise the pitch of calls for his axing even higher.

Kohli hasn’t batted in Test cricket much since the start of 2020. He has played three Tests – two in February 2020 in New Zealand and one in Australia (Adelaide) in December 2020 and he failed to impress. With just one fifty in this period, he averages 19.33.

Root, on the other hand, has been among runs and has played 10 Test matches since the start of 2020.

While Root has 426 runs from two Tests this year, he scored 464 in eight Tests last year. And while there was no century last year, Root has begun with two big centuries this year – a double ton and a 185 in Galle.

Inspiring his teammates to follow his technqiue while batting against spinners will be key for the England captain.

For Kohli though, it will be about reclaiming his spot as the leader. (IANS)