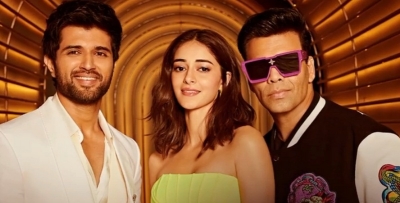 New Delhi– From “suhaag raat” to a sex playlist and threesomes, celebrities have not shied away from speaking their “naughty” minds on the popular tongue-in-cheek show ‘Koffee With Karan’, hosted by filmmaker Karan Johar, who is a reflection of what the society wants to see.

The seventh edition of the talk show is currently airing on Disney+ Hotstar and it has seen the who’s who of Indian cinema such as Ranveer Singh, Alia Bhatt, Janhvi Kapoor, Sara Ali Khan, Akshay Kumar, Samantha Ruth Prabhu, Vijay Deverakonda, who got their A-game on and spoke freely about their lives on Karan’s sofa.

Ranveer and Alia were the first to be a part of the maiden episode of the show, which first aired on the OTT platform on July 8.

The ’83’ star spoke candidly about how he has a “different sex playlist”.

He then talked about having a “quickie in the vanity van”. He shared: “There’s a risk element involved but that’s what makes it more exciting.”

While Alia said “suhag raat” does not exist and it is “just a myth”, Ranveer revealed he was not tired at all after the wedding and instead was “very on”.

The second episode, which aired on July 14, featured Janhvi and Sara.

KJo had asked Janhvi about having sex with an ex, where the ‘Dhadak’ star replied: “No, can’t go backwards.”

In the third episode, it was Karan who was seen talking about his sex life with Akshay Kumar and Samantha.

While having a conversation about their personal lives, Karan spoke to Samantha about his sex life and said: “My Love and Sex Life..It is very lonely, Sam. You and I are floating in the same boat”, cryptically pointing towards her separation with south actor Naga Chaitanya.

The episode featuring Vijay and Ananya was a fiery one! It gave out details about the Telugu star that no one would have ever known.

Vijay, who’s now regarded as perhaps the country’s sexiest single man, revealed to Karan that the most public place he has had sex in is “a boat”. Appearing with “Liger” co-star Ananya Panday in the fourth episode, Vijay clarified that the boat in question was in fact “like a small yacht”.

Karan replied: “In the middle of the ocean? Nobody else or like… ?” Hearing the actor’s reply, Karan remarked that it was sexy, even as Ananya said: “I don’t do all these things.”

Karan jumped on Ananya’s statement and asked her if she hadn’t had sex in a public place, she said: “I haven’t done it.”

Vijay also let out that he had had sex in cars. Karan then questioned: “But aren’t they uncomfortable? I haven’t done anything in a car.”

To which the ‘Liger’ star said: “Desperate times.”

The upcoming episode will have ‘Laal Singh Chaddha’ stars Aamir Khan and Kareena Kapoor Khan. In the latest promo, the host is seen asking Kareena: “Quality sex after babies myth or reality?”

Kareena funnily gives it back and says: “You wouldn’t know.”

To which, Karan replies: “My mother is watching this show and you all are talking badly about my sex life.”

Pat came a cheeky reply from Aamir: “Your mother doesn’t mind you talking about other people’s sex life”. (IANS)