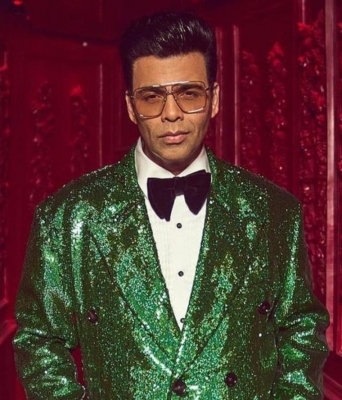 Mumbai– Karan Johar, who wears multiple hats and is one of the most revered film personalities of India, has returned with the seventh season of his popular chat show ‘Koffee With Karan’.

The show this time around, cranks the entertainment quotient up notch with celebrities spilling beans on the coveted couch, not to forget the sensational rapid fire that has over the years added spice to India’s simmering pop-culture.

As the show continues to garner love and attention from the audience in equal measure, the Dharma productions head-honcho sitting on the other side of the couch, spoke with IANS about having made changes to the episodes just before going on air, his personal favourite episode from the show’s journey of 18 years and times when things hit the rocky road.

Karan, who started his film journey as an assistant to his cousin Aditya Chopra in the iconic movie ‘Dilwale Dulhania Le Jayenge’ and also starred in the film as Raj’s (played by Shah Rukh Khan) friend, has immense confidence in his multi-tasking abilities. The confidence manifests itself in the panache with which he handles things on multiple fronts be that of a show host, reality TV show judge, filmmaker or the producer who heads one of India’s premiere studios.

He tells IANS, “Multitasking is a strength that I have acquired over the years. I can compartmentalise things in my life fairly strategically. When I am a filmmaker, my complete attention is there. When I am a talk show host, my focus goes there. When I am producing films, that process keeps going on.”

“So, I don’t believe that either of them bleed into each other or I lose focus because I have been able to actually design and wire my brain to do many things at the same time”, he furthers his point.

The couch has been a witness to some of the most controversial statements of all time made by celebs in flow of the conversation. Something that someone might have said in jest may not have sat well with the person whom the comment was directed at. Has Karan ever stepped in to save the day? The answer is a sharp “Yes”.

“Many times, it has happened that I had to step in two douse the fire after rapid fire. I remember when Sonam and Deepika came to the show and spoke whatever they had to, Chintu ji (Rishi Kapoor) was very upset. I had to step in to make things alright. I have shows banned and taken off air, which I felt terrible for,” Karan shares.

Not just that, the show host has actually sat on the edit table and removed bits that would have unleashed a Tsunami of sorts.

He lets in a secret, “I have had times where I have actually edited comments made on the show by celebs before the telecast because I felt that it would land up in trouble. Many times actors have called me directly requesting to cut something that they have said as a slip of tongue. I have done this because for me relationships come before everything.”

The show has seen many iconic moments unfold in front of the camera but, for Karan the most favourite episode remains, “where the Kapoors – Rishi Kapoor, Randhir Kapoor, Rajiv Kapoor and Neetuji graced the show”.

The filmmaker describes it as an emotional moment both as a show host and as family friend to Kapoor khandaan.

As the conversation wraps up, IANS pops a slightly unpredictable question just to gauge Karan’s interest in acting post the debacle of Anurag Kashyap’s ‘Bombay Velvet’ where the former played the character of Kaizad Khambatta.

Gracious enough, KJo responds that he is really sad that his acting career came to a grinding halt. He wants to reverse that because he really believes that there is an actor and him who should be given an opportunity.

“I have got no acting offers after ‘Bombay Velvet’, it has literally become a ‘dhabba’ on my filmography, even Anurag Kashyap doesn’t approach me now”, he concludes in jest. (IANS)