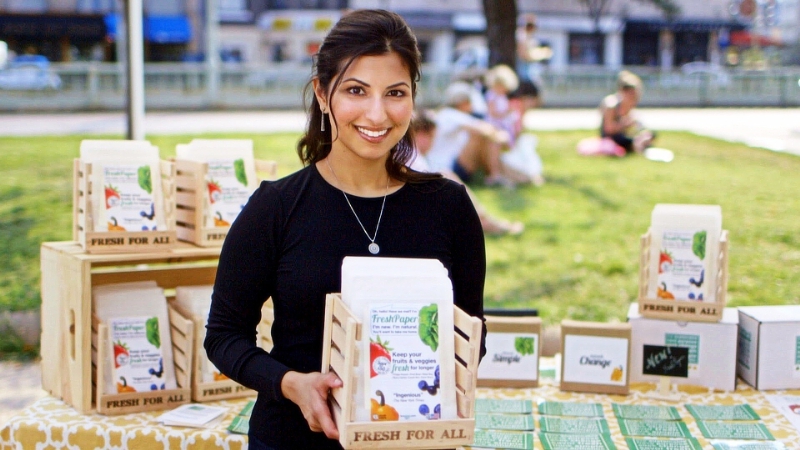 MOUNTAIN VIEW, Calif.–A young Indian American woman, Kavita Shukla, is in the running for a Super Bowl Ad for her invention, FreshPaper. Selected from over 15,000 companies, Shukla is poised to make history as her invention and her vision for a better food system have the chance to reach more than 100 million during the 2016 Super Bowl.

Shukla started her business at a Farmers’ Market in Cambridge, MA, and with only $300. Her invention is based on a home remedy from her grandmother in India.

This week, Intuit Inc., announced that FreshPaper, a simple innovation that has garnered international recognition for its potential to change the food system, is in the running for a once-in-a-lifetime opportunity: a television commercial during the 2016 Super Bowl.

FreshPaper started as Inventor Shukla’s middle school science project and was inspired by a homemade “spice tea” her grandmother in India once gave her as a remedy for drinking contaminated tap water. A grassroots movement has since taken FreshPaper from a single farmer’s market stall in Cambridge, MA to farmers and families worldwide.

The inspiring FreshPaper story has captured the attention of influencers like Oprah Winfrey and Richard Branson, and was the subject of a short film by Hollywood director Bryce Dallas Howard. In 2013, FreshPaper was presented with the INDEX: Award, the world’s largest prize for design (previously awarded to Apple and Tesla) by Her Royal Highness the Crown Princess of Denmark.

FreshPaper sheets are infused with organic spices that keep fruits & vegetables fresh for 2–4x longer, naturally. One small sheet is simply dropped into fridge drawers, cartons, and bags filled with produce. FreshPaper is made in the USA, and is recyclable, biodegradable, compostable.

Today, the FreshPaper brand is recognized as a pioneer in the movement towards reducing food waste. Shukla hopes that the road to the Super Bowl commercial will spark a national conversation around the enormous global challenge of food waste, and inspire other entrepreneurs, especially women, to think bigger with their ideas.

“This is an incredible opportunity that would help us make fresh, healthy eating more accessible and affordable than ever before,” said Shukla. “When I set up a stall at my local farmer’s market, after trying and failing for years to bring my idea to the world, I could never have imagined that one day we’d have a chance to share our vision for a better food system with 100 million people during the Super Bowl.”

The winner of the Super Bowl ad will be determined by a global vote. Supporters can cast their daily votes for FreshPaper at www.NationalFreshLeague.com.

The patented and award-winning product is carried by national retailers like Whole Foods, Bed Bath & Beyond, Ace Hardware, and Amazon.com, and is sold in packs of 8 sheets (approximately a 2-month supply) for $9.99. FreshPaper helps customers save money, reduce food waste, and eat fresh.

While the world’s farmers harvest enough food to feed the planet, more than twenty-five percent of the world’s food supply is lost to spoilage, resulting in massive land, water, energy, and human costs. Fenugreen is taking on this enormous, yet often overlooked, global challenge with its simple innovation, FreshPaper.

FreshPaper is recyclable, biodegradable and compostable, and the patented & award-winning product is made in the USA. Today, FreshPaper is shipped to farmers and families in 35+ countries and retailers nationwide including Whole Foods, Bed Bath and Beyond, and Sprouts.

Shukla is an inventor, designer, social entrepreneur and an inspiration for young women and girls to believe in the power of their own ideas. She is the Founder and CEO of Fenugreen.

Shukla holds four patents, and has received several international honors as an inventor, designer, and entrepreneur, including most recently, the INDEX: Design to Improve Life Award – the world’s largest prize for design. She has been inducted into the National Gallery for America’s Young Inventors and was a First Place Winner at the Intel International Science & Engineering Fair for her initial research on FreshPaper.

Shukla was a featured speaker at the Women in the World Summit at the Lincoln Center along with Hillary Clinton, Angelina Jolie, Meryl Streep, and Oprah Winfrey. Her work on FreshPaper, and her quest to take on global food waste, has been featured by CNN, The New York Times, Forbes, The Washington Post, The Economist, Bloomberg, Newsweek, The Guardian, Oprah Magazine, Glamour, and The Today Show. Shukla was also featured as one of the “7 Entrepreneurs Changing the World” by Fast Company and on the Forbes “30 under 30” list. She holds a BA from Harvard University.