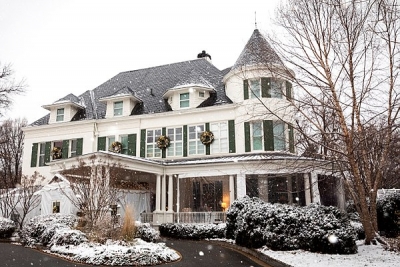 New York–On January 20, 2021, when Vice President-elect Kamala Harris moves into the One Observatory Circle in Washington, D.C., she will be bookending a remarkable chapter in American history that began with the first ever occupant of this very address back in the late 70s.

Walter Mondale, the first ever Vice President to live in One Observatory Circle in 1977, would later become the first ever US presidential candidate to nominate a woman as his running mate and that happened in 1984.

Mondale launched what he called a “powerful signal” to Americans, announcing Geraldine Ferraro as his running mate in the 1984 presidential campaign.

“There are no doors we cannot unlock. We will place no limits on achievement. If we can do this, we can do anything,” Ferraro said during her acceptance speech at the Democratic National Convention, striking the notes that Harris would later frame in her 2020 hit album.

Mondale lost that election in a landslide, winning only 13 electoral votes to Reagan’s 525 but he set in motion the ingredients of a slow shattering of the glass ceiling that Harris finally cracked in 2020.

Harris is the first Indian and Black American and the first woman to win election to America’s highest political office.

Harris’ earliest memories of political contests began in a yellow stucco house in Oakland, California, back during the Civil Rights protests in the early 60s.

Harris’ new home in Washington D.C. will be a stark departure from her earlier digs.

One Observatory Circle is a 19th century Queen Anne style house on the grounds of the US Naval Observatory located about 2.5 miles north of the White House.

Built in 1893, the Vice President’s residence features nearly 10,000 square feet of built-up space across three floors. Congress first greenlighted this as the official residence of the Vice President in 1974 which, incidentally, was right around the time of the first ever female presidential run in America’s political history.

Just two years earlier in 1972, Shirley Chisholm, was the first woman to run for the Democratic presidential nomination and the first Black candidate to run for a major party’s nomination.

Harris almost never fails to mention Chisholm, who was also Caribbean American – her father was from Guyana, her mother from Barbados.

Her mother is another constant feature of her speeches, the woman who taught her kids “don’t take s*** from anybody”.

Harris has consistently framed her triumph as one that brings smoother journeys to “little girls” dreaming big.

Like she said on the night of November 7, 2020: “While I may be the first woman in this office, I will not be the last because every little girl watching tonight sees that this is a country of possibilities.”