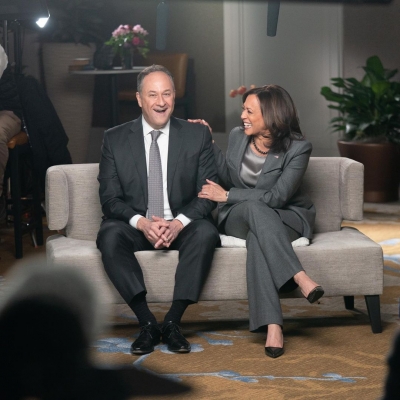 Even when he’s not gushing, Emhoff, in his new role, will be a barrier breaker.

President-elect Joe Biden touched on the subject briefly when he named Harris to be his Vice President pick but his remarks were about the technicalities, of the fact that Emhoff will be the first Second Gentleman America has ever known.

But there’s that other thing Emhoff brings into sharp focus, a certain warmth that he shares with Harris that both of them feel comfortable enough to share plenty of it in public domain.

Take Emhoff’s picture post from November 7, 2020. “So proud of you” with two hearts and two American flags accompanying an image of him hugging Harris against the backdrop of rolling green meadow.

Or him holding up a tee saying Madam Vice President at a wayside store in Washington D.C.

Everyone gets that it’s all great PR too but it is also true that we didn’t see much of this candid vibe the last four years.

The signs are clear, we’ll be getting a lot of it the next four.

Emhoff will also be the first Jewish person to be a Second (or First) Spouse.

Emhoff kicks off with lectures on “Entertainment Law Disputes” in the upcoming spring semester at Georgetown University. Additionally, Emhoff will serve as a Distinguished Fellow at Georgetown Law’s Institute for Technology Law and Policy.

Well before the 2020 election, Emhoff announced that he was leaving behind a partnership at the international law firm DLA Piper.

His bio on the law firm’s site describes him as someone who is equally good at “litigating high-stakes cases in the public glare or acting as a trusted advisor behind the scenes”. It’s the latter role that Emhoff will now settle into.

Emhoff has already won adulation for saying the simplest things – about supporting rather than advising Harris, about taking pride in her achievements and jumping right in when trolls otherwise people of colour or minorities.

When the online attack mob came for Jill Biden, insisting that she must drop her “Dr” prefix, here’s what Emhoff had to say: “Dr. Biden earned her degrees through hard work and pure grit. She is an inspiration to me, to her students, and to Americans across this country. This story would never have been written about a man.”

All the signs already exist that Emhoff is going to be Harris’ top cheerleader.

“Proud husband to Kamala Harris” is his chosen escalator pitch.

In the process of turning the spotlight on his wife, Emhoff has already begin normalising the idea that being respectful to women’s careers and lives is an act of strength. (IANS)