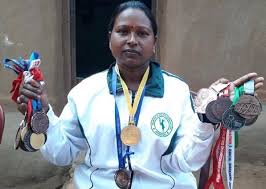 Ranchi– For athlete Sangeeta Lakhra, it was another kind of dream that has come true after Jharkhand Chief Minister Hemant Soren’s intervention. This dream was not related to her career, but it was about having a toilet in her home.

Hailing from a poor background, Lakra’s family could not afford a toilet in their thatched house. Despite the poverty, she managed to excel in sports, winning several medals at the national and international level. She recently won a gold medal at the 41st National Masters Athletics Championship held in Manipur.

Despite all the laurels, Lakra’s family could not afford a toilet in the house and she was forced to defecate in the open. It took a local newspaper to highlight her plight and a social worker posted a tweet on this and tagged it to the Chief Minister.

Hemant Soren, who has been using his Twitter account for giving orders and instructions to the officials, was quick to take the cognizance. He tweeted in Hindi and directed the District Collector (DC) of Simdega: “Kindly help all the medal winners in the district on priority basis and keep me informed.”

This set the officialdom rolling and the DC on March 5 tweeted pictures of the toilet being constructed at Lakra’s residence.

Lakra, a marathoner, is finally seeing her long pending wish getting realised.