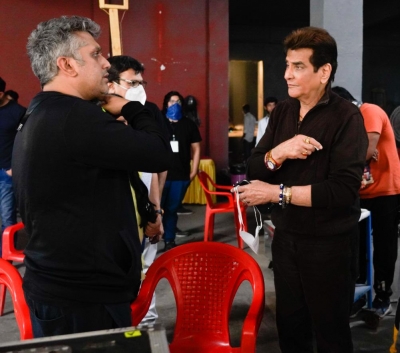 Mumbai–Veteran actor Jeetendra Kapoor on Thursday dropped by at the set of “Ek Villain Returns”, to meet the cast and crew of the film.

He spent time with director Mohit Suri and actors John Abraham and Disha Patani, and they discussed the progress of the film’s shoot.

John and Disha were happy to meet the yesteryears’ star and enjoyed their own fan moment. Before leaving, he gave his blessings to John, Disha and Mohit, and posed for photo-ops with them.

Jeetendra’s wife Shobha Kapoor and daughter Ekta Kapoor are among names credited as the film’s producers.

Earlier, Suri said in a statement that he is glad to finally start the shooting the film. “I was waiting for this day for a while now. Unfortunately with the pandemic, things went off-track but now I am glad we are back to where we belong — making movies! I hope to recreate the Ek Villain magic with this one,” said the director.

The film also features Arjun Kapoor and Tara Sutaria, and is slated to release on February 11, 2022. (IANS)