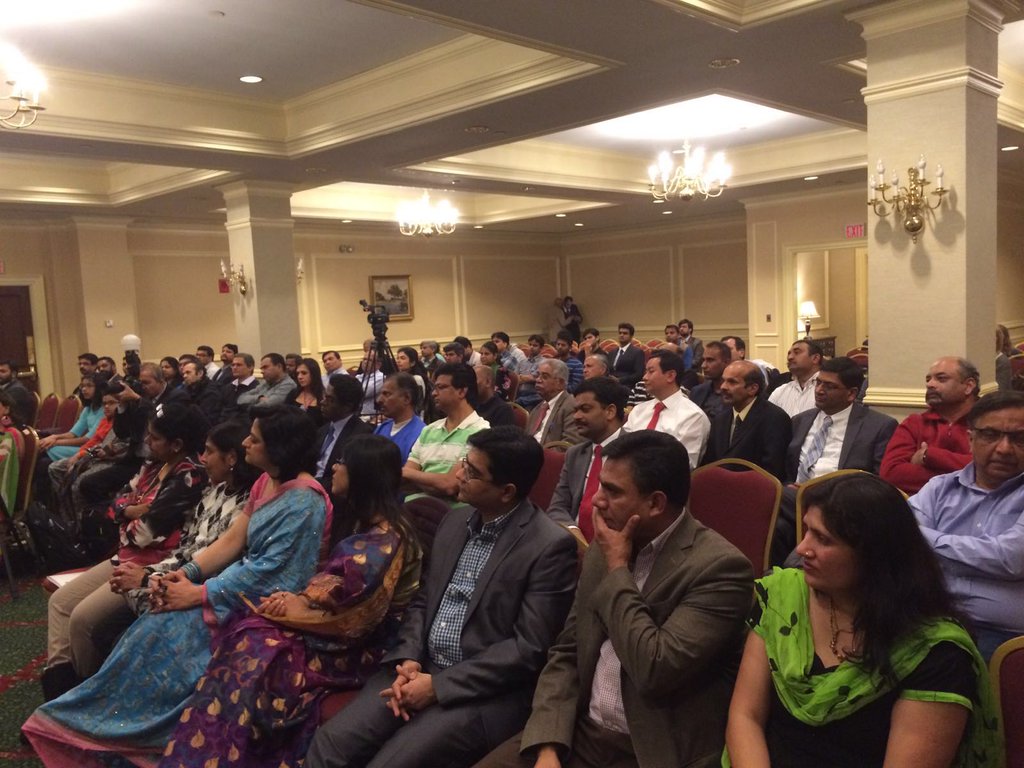 CAMBRIDGE, MA—Indian Minister for Communications and IT Ravi Shankar Prasad met Massachusetts Governor Charlie Baker, addressed a gathering of Indian community and had a round table with senior executives of American and Indian companies.

India’s future as a technology powerhouse and its plans to connect India’s 600,000 villages to the Internet through the Digital India programme were the focus of a roundtable of top American and Indian companies.

“India is sitting on the cusp of a digital revolution,” he said. “Whether it is big metropolitan cities or small towns, a well-connected India has the potential to not only usher in economic and welfare opportunities for its citizens, but also the global economic order.”

The Indian “government is taking every policy decision in a transparent, predictable and reasonable manner,” Prasad said encouraging “American businesses to take advantage of the Digital India programme, and the growth opportunities in India.”

Prasad also outlined the progress that has already been made to implement Digital India programme and his priorities for the future.

Aghi said, “Prime Minister Modi’s directive to connect Indians across the country is a tremendous opportunity for both Indian and US companies alike.”

Noting that 85 percent of Indians still do not have access to the Internet, he said “the government could make it easier to obtain clearances to install cell phone towers.”

“IT infrastructure can be further expanded by lifting the ban on foreign satellite operators so they can provide spectrum in hard-to-reach areas.”

Dan Gupta of UST Global commented on the economic growth that can be spurred by the Digital India initiative and adoption of key technologies across sectors.

“By some estimations, the Digital India initiative could help boost India’s gross domestic product (GDP) by around $550 billion – upping its GDP by $1 trillion by 2025,” he said.

Sonny Khurana, CEO of iTech, praised the rapid strides in connectivity and the startup ecosystem under the current government.

Prasad also spoke at India Conference 2016 at Harvard University that is organized by Indian students at Harvard.

“The digital profile of India is changing,” said Prasad at Harvard, adding that following the idea of smart cities, the Indian government is coming up with the idea of a digital village concept that will enable villages to have wireless, virtual connection, a digital health center, solar-powered LED lights, and a digital education center.