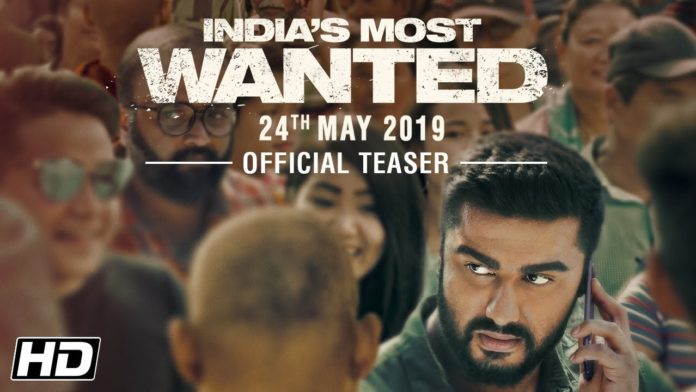 New Delhi– In the midst of the election season, a teaser of Bollywood film ‘India’s Most Wanted’ has generated curiosity on the social media about the real inspiration behind the film, with people interpreting it in different ways.

In the teaser, the terrorist says, “Aatma kabhi nahin marti, shareer marta hai. Main logon ko maar nahin raha. Bas unki aatma ko doosre shareer mein bhej raha hoon. Ye main nahin keh raha. Gita mein Shri Krishna ne kaha hai. (The soul never dies, only the body dies. I am not killing people, but only transferring souls from one body to another. It is not me saying this but it was said by Lord Krishna in Gita).”

Director Rajkumar Gupta, who has earlier helmed films like ‘Aamir’, ‘Raid’ and ‘No One Killed Jessica’, does not tell who the terrorist is, but he mentions the film is “inspired by true events”.

The film’s makers have teased the terrorist as a ‘nameless’ and ‘faceless’ person, but described him as “India’s Osama”.

A section of social media users slammed the makers of the film for citing the Bhagavad Gita, while others conjectured the story may be based on Indian Mujahideen terrorist Yasin Bhatkal who was arrested from the India-Nepal border in August 2013, and topped the Delhi Police list of 15 most wanted terrorists involved in bombings across the country.

“Blast in 8 cities and 400+ died and still he’s not in media. Why don’t we know about him,” wrote one Twitter user, with several others raising the “who is he” question.

Another discussion is about how one blast after another kept taking place during the Congress rule.

“Was the UPA government sleeping when India’s Osama planned attacks after attacks, and killed 433? Clearly, their policy of ‘kadi ninda’ was a flop,” wrote one user.

However, Congress leader Tehseen S. Poonawalla raised a question by tweeting: “One of the key aspects of BJP campaign has been their stance on terrorism, but why such lenience in case of ‘India’s Most Wanted’ terrorist?”

One user wrote: “A regime where one nameless and faceless man orchestrated serial blasts across the country killing 433. We need accountability for India’s Osama. Why such a big failure in dealing with India’s Most Wanted.”

With the teaser trending on Twitter and netizens interpreting the theme in different ways, IANS tried to get a comment from Gupta but he was unavailable.

A source close to the film said Gupta will talk only after the trailer is out on April 30.

According to Arjun Kapoor, a lead actor in the movie, the film is a story of “guts and pride”.

“It’s about the 5 men who save the lives of a billion people by hunting down India’s Osama,” he tweeted. (IANS)