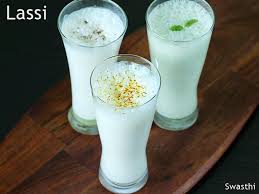 New Delhi– Lassi, cold coffee and watermelon juice are among the preferred beverages that are helping people across India beat the searing heat.

The temperature is soaring, spreading the heat wave blues all over India. But people have come up with their own ways to beat the heat, especially with chillers like lassi and cold coffee.

Uber Eats on Monday released the Indian chapter of The Eats Cravings Report 2019, a snapshot of India’s favourite cravings and the most popular binge worthy dishes.

Conducted between January and May 2019, the report revealed that Mumbai clocked in the highest number of orders for lassi.

It also stated that Jaipur ditched the traditional tangy summer drink of jal-jeera for a chilled cup of cold coffee, while Pune opted for a good old cup of hot tea. Chennai kept it healthy with a refreshing glass of watermelon juice. Oreo shake topped beverage charts across Mangalore.

The findings also provide an insight into some of the most widely received requests for sugar cravings across cities. Indians ordered gulab jamun to satiate their sweet tooth, followed by ice cream and ras malai.

It revealed that every city has its own personal favourite flavour – people in Bengaluru stayed true to their roots with the highest number of tender coconut ice-cream, while Mumbaikars are beating the heat with strawberry ice-cream. Belgian chocolate satiated palates for Delhiites, while Mango was the most popular flavour in Pune.

When it comes to chocolate, Indians binged on chocolate milkshake the most with close competition from hot chocolate sundaes and Death By Chocolate pastries.

The report also revealed that ‘extra sauce’ topped the charts as the most popular food delivery request, followed by ‘spicy’ and ‘extra onions’. The western cities of Ahmedabad, Mumbai and Surat ordered the highest number of ‘Jain’ dishes. In the southern cities of Bengaluru, Hyderabad and Visakhapatnam, onions were a popular craving choice.