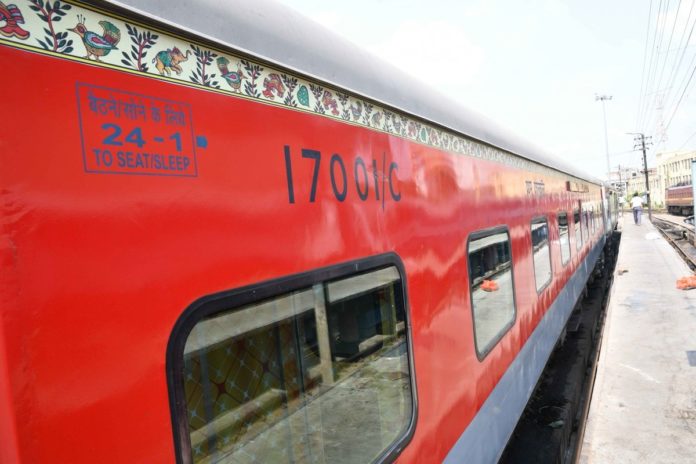 New Delhi– In a bid to reduce travel time, the Indian Railways, under its 100-day action plan, envisages increasing the speeds of trains on the Delhi-Mumbai and Delhi-Howrah routes at an investment of over Rs 13,500 crore, officials said.

A senior railway ministry official told IANS: “In a proposal approved by Railway Minister Piyush Goyal, the Railways plans to increase the train speed to 160 kmh on the busy routes of Delhi-Mumbai and Delhi-Howrah in the next four years.”

By increasing the speeds on these busiest rail routes, the travel time between Delhi-Howrah and Delhi-Mumbai will be reduced to 12 hours and 10 hours, respectively, as compared to the current 17 hours and 15.5 hours, the official said.

Currently the maximum speed on these routes, which account for 30 per cent of passenger and 20 per cent of freight traffic, is 130 kmh.

The official said the proposal envisages that in the next 100 days, approval should be obtained for this project and the proposal is being sent to the Cabinet Committee for Economic Affairs (CCEA).

The official said that this is one of the 11 proposals prepared by the railways in its 100-day plan, with instructions to initiate immediate action to implement them by August 31.

The plan document has been prepared on the direction of Prime Minister Narendra Modi to lay down the vision for the Railways for the next three months, the official said.

Besides increasing the speeds on these routes, the other plans for the national transporter to be initiated within the next 100 days include the Railways’ earlier proposal of handing over certain low-congestion routes to private players.

The official said that under this plan, it may consider giving premium trains including Rajdhanis and Shatabdis to private players.

A tender will be floated within four months and the applicants will have to prove that they can run entire operations of the trains — from ticket bookings, to ticket checking, running the train within the time, catering services and more, he said.

The Request for Proposal (RFP) and a Request for Quote (RFQ) could be issued within the next 100 days, the official said.

The official, however, added that before engaging private operators, the Indian Railways will consult the trade unions.

Last year, the Niti Aayog in its ‘New India’ vision had advocated for more private participation in the Railways, including ownership of locomotives and rolling stock, to modernising railway stations.

The Railways has also planned to start work on the pilot projects for advanced signalling system for safety and higher throughput within 100 days.

The official said the advanced signalling system will enhance safety by ensuring that technological aid to the loco pilot is provided to eliminate or considerably reduce accidents due to overshooting of signals and overspeeding.

He said that it will also help in increasing the line capacity on the railway network by 46 to 48 per cent on absolute block system and will also help in improving the punctuality of trains by providing information to the loco pilots of the signal in advance, even in adverse conditions like fog or sharp curves and tunnels. (IANS)