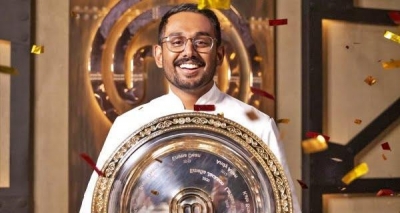 New Delhi– When Sarah Todd, fashion model-turned-restaurateur, made ‘aloo-gobhi’ on the sets of MasterChef Australia in 2014, it made headlines because Indian food was then still a novelty Down Under.

With Justin Narayan, an Australian youth pastor of Fiji Indian origin, becoming the second person of Indian descent to win MasterChef Australia, wowing the judges with his Indian take on chicken tacos, it’s now official: Indian flavours have arrived and are there to stay in Oz.

The first person of Indian extraction to top the popular reality TV show was Sashi Cheliah, a prison guard, who lifted the trophy and walked home with the prize money of A$250,000 (a little under Rs 1.40 crore) in 2018.

In the 2021 final, which was telecast on Tuesday night, Narayan, 27, pipped a challenger of Indian-Bangladeshi origin, Kishwar Chowdhury, who got the judges literally eating out of her hand with her ‘panta-bhaat’.

What Chowdhury called Smoked Rice Water is a humble peasant dish, the ultimate summer cooler, of cooked rice soaked in water overnight, served with ‘pakodas’ and a sour preparation made with ‘mourola’ fish, lashed with a generous squeeze of the fragrant ‘gondhoraj’ lime.

Chowdhury served ‘paanta bhaat’ with ‘aloo bhorta’ (the Bangladeshi equivalent of ‘aloo bhaate’ — boiled potatoes mashed with hot mustard oil, onions and green chillies — served on the Indian side of the Great Bengali Divide). What Chowdhury did was add sardines and salsa to make it a truly a crossover dish.

“Indian flavours are now mainstream, unlike how they were perceived when I appeared on MasterChef Australia,” said Todd, who informed a global audience at a recent webinar how ‘paani poori’ had become the rage all over her country.

“You can now buy ‘paani poori’ shells at your local grocery store,” she said.

Interestingly, Todd, who now runs the Antares restaurant and beach club in Goa, was speaking to IANS from her home city, Melbourne, as she was returning from dinner at a popular new Indian restaurant named ‘Daughter-in-Law’.

According to MasterChef Australia insiders, the show has a bigger footprint in India than in Australia, so the growing prominence of contestants of Indian origin may not be entirely coincidental.

The timing seems to be just right for Narayan, who first visited India in 2017, and now plans to launch a food truck or a restaurant serving just the kind of Indian food he has grown up with. And with the MasterChef Australia 13 cheque, his dream is certainly within his grasp.(IANS)