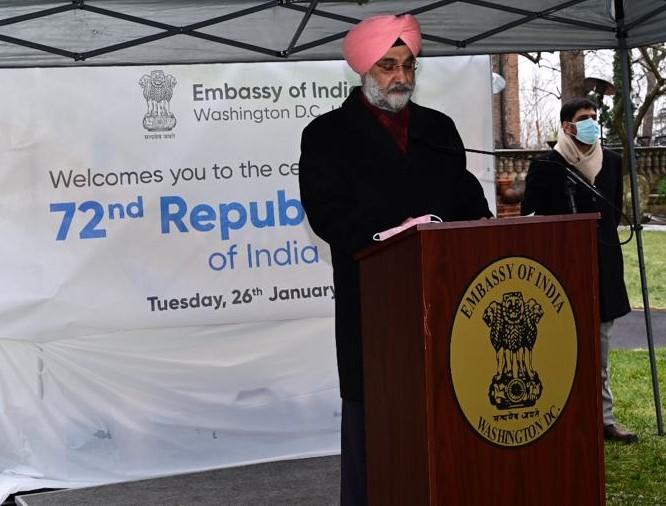 WASHINGTON, DC–The 72nd Republic Day of India was celebrated in Washington D.C. with a flag-hoisting ceremony on 26th January, 2021 at the India House. Members of the Indian community joined the celebrations in large numbers virtually, in view of the local public health guidelines due to COVID 19.

Ambassador of India, Taranjit Singh Sandhu, unfurled the tricolor, which was followed by singing of the National Anthem. In his remarks to the community, Ambassador complimented them for their work during the pandemic and their role in bringing India and the US closer.
He said that the Indian Government “looks forward to working with the new Administration, led by President Joseph Biden and Vice President Kamala Harris. From outer space to nanotechnology, from the Indo-Pacific to climate change, from healthcare to education & IT, there is a recognition, that our partnership can benefit, not just our two nations, but the entire world.”
The Address by the Hon’ble President of India on the eve of Republic Day was played. This was followed by a short cultural program involving local artist and rendition of patriotic songs by students of Gandharva School of Music, Richmond and a violin recital by Mr. Kamalakiran Vinjamuru.
Advertisement