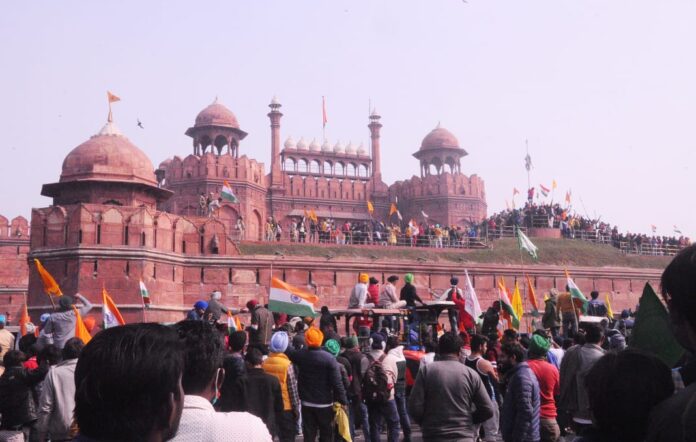 New Delhi–The farmers movement that had been peaceful for the last two months turned violent on Republic Day on Tuesday after scores of protesters deviated from the designated route for the proposed tractor rally.

After a clash between the farmers and the police at the ITO intersection where hundreds of protesters were seen chasing police personnel with sticks and ramming their tractors into the buses, they headed towards the Red Fort at around 1 p.m.

Hundreds of farmers on their tractors with flags raising ‘Jai Jawan, Jai Kisaan’ slogans reached central Delhi from different parts of the national capital and ultimately made their way to the Red Fort after breaching all the barricades on the way. 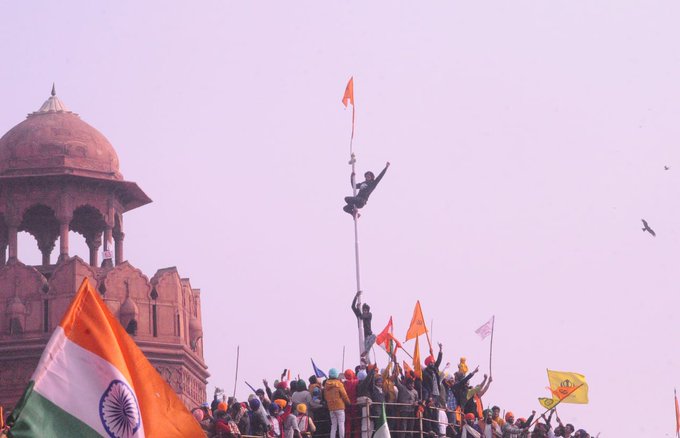 The farmers swarmed the Red Fort at around 1.45 p.m. and waved flags from the ramparts of the 17th century monument. They even hoisted the Nishan Sahib flag on a flagpole inside the Red Fort, while some Nihangs were seen waving their swords from the dome of the historic monument.

Later the police were seen removing the flag while trying to disperse the protesters from Red Fort, resorting to lathi-charge which resulted in clashes between the two sides.

There was complete mayhem at the site as the agitators refused to budge and continued to raise slogans in support of the farmers’ cause, often indulging in clashes with the police, which seemed to be outnumbered by the protesters.

The protest went out of control for some time but later heavy deployment of the CRPF brought the situation under control to some extent. The protesters finally started to vacate the spot at around 5.15 p.m., after laying siege at the iconic monument for over two hours.

Soon after the unexpected scenes at the Red Fort, the Samyukta Kisan Morcha, an umbrella body of farmers’ unions protesting against the three Central farm laws, issued a statement, distancing itself from the ‘violent elements’.

The farmers’ union said, “We condemn and regret the undesirable and unacceptable events that have taken place today and dissociate ourselves from those indulging in such acts.”

The farmers were supposed to remain in the areas adjoining the Delhi borders and not venture towards central Delhi, but they violated all the agreements and guidelines given to them. (IANS)