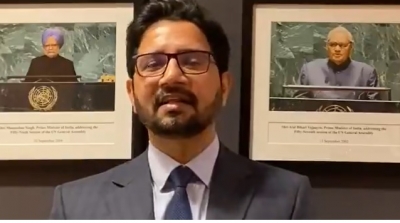 “Pakistan Representative made unwarranted remarks, which symbolise nothing but a Pavlovian response aimed to misuse any forum, and every topic, to propagate false and malicious propaganda against my country,” Rajesh Parihar, a Counsellor at India’s UN Mission, said in a statement to the Council on Thursday.

He was responding to Bilawal Bhutto’s detour from the Council debate’s topic of Conflict and Food Security to raise the delimitation of electoral constituencies in Kashmir, calling it “an assault on the United Nations, the Security Council and its resolutions” and describing the Union Territory as “illegally occupied”.

Parihar said: “The Union Territories of Jammu and Kashmir and Ladakh were, are and will always remain an integral and inalienable part of India. This includes the areas that are under the illegal occupation of Pakistan.”

“No amount of rhetoric and propaganda from any country can deny this fact,” he added.

As for Islamabad’s role, he said: “The only contribution that Pakistan can make is to stop state-sponsored terrorism.”

Criticising the Council, Bilawal Bhutto said: “Kashmir has become a symbol of the dysfunction of this institution and this Council”, adding: “The inaction of this body as the internationally recognized disputed status of the region is undermined.”

The Council’s “inaction” could relate to its Resolution 47 adopted on April 21, 1948, which asked Pakistan to withdraw its “tribesmen” and nationals from Kashmir and not give aid to those fighting there.

Bilawal Bhutto said that “Pakistan relied heavily on wheat and fertilisers from the region (of Ukraine” and “our farmers are suffering and so are our people”.

While his country’s farmers are unable to grow enough food to meet even the country’s needs, unlike Indian farmers who produce enough for their countrymen and for sending to needy nations, he asserted: “We challenge those that worry about food security: Resolve the Kashmir dispute, open the door to peace in South Asia and watch how the farmers of Pakistan and India can feed the world.”

Later at a news conference, Bilawal Bhutto admitted that the previous government of Imran Khan had not adequately fought terrorism and ignored the national action plan to counter terrorism.

“Unfortunately, despite having this plan being on consensus, it hasn’t been owned and implemented in the way it should have been by the previous government,” he said.

The government of Prime Minister Shehbaz Sharif, he asserted, will fight terrorism. (IANS)