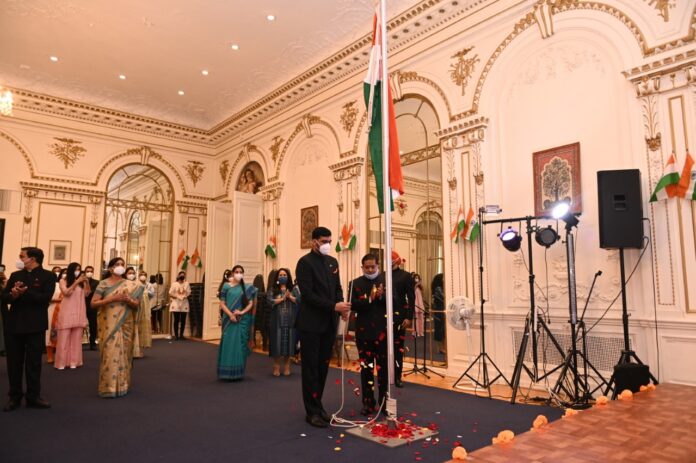 Randhir Jaiswal, Consul General, unfurled the national flag after which the national anthem was sung. Consul General then read out the address of the President of India. A short cultural program was presented by Bhartiya Vidya Bhavan, which included singing of patriotic songs and poetry recitation.

Due to the current pandemic caused by COVID-19, the event was telecast live through the Consulate’s social media platforms. Social distancing was maintained during the event. The event was viewed virtually by around 9,000 people.

In addition, Consul General attended the flag hoisting ceremony organized by Federation of Indian Associations (FIA) at the Times Square. He also addressed students of Cornell University and participated in other Independence Day celebrations organized
by community organizations such as Global Organization of People of Indian Origin
(GOPIO), Connecticut and central New Jersey; India Association of Greater Boston and
Council of Indian Organizations in Greater Philadelphia.

Consul General attended these events virtually. Apart from these celebrations, Consul General also shared his good wishes via video messages with other organizations who held functions on the occasion.