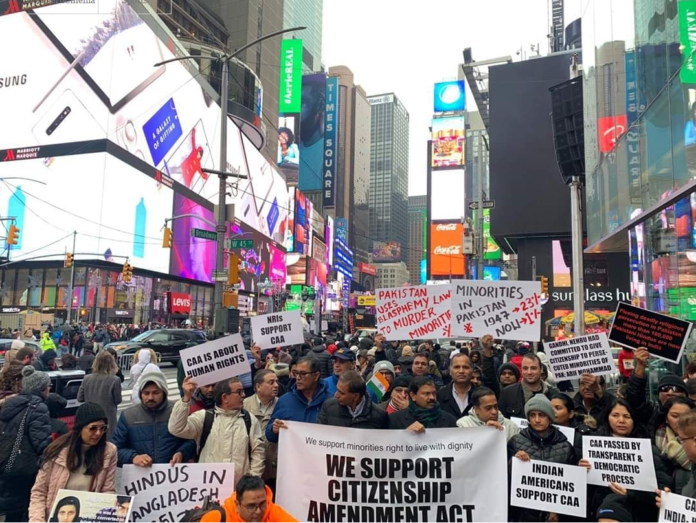 Los Angeles–Hundreds of members of the Indian-American community took to the streets in California to mark India’s Republic Day and protest against the controversial Citizenship Amendment Act (CAA), National Register of Citizens (NRC), and the National Population Register (NPR).

The protest rally took place on Sunday in the city of Artesia, about 19 miles from Los Angeles, reports Indica News.

Rajashik Tarafder, a research scholar at Caltech who participated in the rally, said: “Even if the Supreme Court sides with the government, I encourage all the people in India and abroad to do what is right and resist. Legal or not, the CAA and NRC must be repealed to preserve the spirit of the Constitution.”

The rally in Artesia was one of several organized across the US, from Decatur, Illinois to Cambridge, Massachusetts, as part of a National Day of Action.

Prerna Chawla, one of the organizers of Sunday’s rally who also helped to put together a December protest in front of the LA City Hall, said: “We came together as a group organically in December after being distraught about what was happening in our motherland… After our first protest at LA City Hall, we wanted to go on fighting against the CAA and NRC and decided to take our protest to Artesia.

“We stood in solidarity with all the protestors across India who are still standing tall after being threatened and tortured for what they believe in.”

After the CAA was passed in India in December 2019, there have been protests in country and abroad to oppose the Act that gives citizenship rights to non-Muslim refugees from Afghanistan, Pakistan and Bangladesh who sought refuge in India before 2015, Indica News added in the report.

Ali Muzaffar, who came all the way from Atlanta to participate in the rally, said that they would be going to San Francisco over the coming weekend “to continue our drive and raise our voices again”.

Meanwhile, Bilal Hussain, LGBTQ+ activist and also an organizer, said that “although the current state of affairs in India is perilous, seeing people from various identities come together to stand in solidarity gives me hope”.

“This is just the first of many actions that will hold our community accountable.”

A group of volunteers also walked from door to door the city’s Pioneer Boulevard, speaking to shop-owners about the CAA and the releated protests in India.

The rally ended with the participants singing the Indian National Anthem. (IANS)