MANHATTAN, KS — The National Foundation for Women Legislators (NFWL) announced on January 20 that Manhattan Mayor and U.S. Senate Candidate Usha Reddi is one of only 43 recipients of their 2019 Elected Women of Excellence Award.

The award recognizes women whose work has overcome obstacles and made elected office a realistic goal for other women.

As a child of immigrant parents from India who first settled in Columbus, Ohio, Reddi registered as a Democrat in 1988, while still working on her Bachelors of Arts in Developmental Psychology at Ohio State University. She has lived in Manhattan for 27 years.

Several Kansas colleagues nominated Reddi for the 2019 Elected Women of Excellence Award. School Principal Jim Armendariz praised her accomplishments as an educator in serving students in the low-income town near Manhattan, Ogden, KS, where Reddi taught. He said, “Usha worked with the district’s least advantaged children, motivating and inspiring them to break through their own barriers and overcome their own obstacles.” 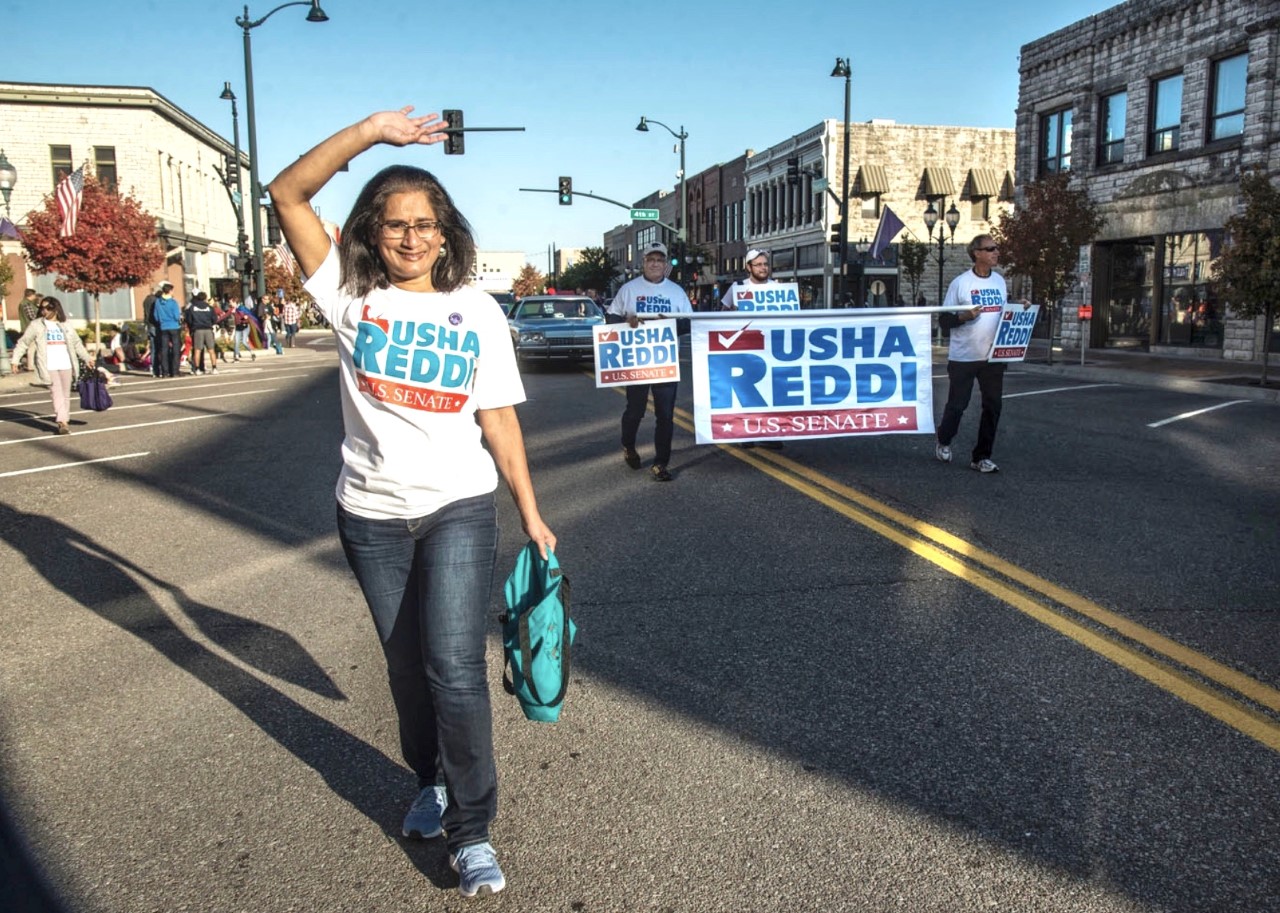 Principal Armendariz cited the multiple awards Reddi won as a teacher, her work to create a Diversity Commission and Diversity DIrector for the school district, and her leadership in developing a mentor program for underserved students by connecting to Kansas State University students.

According to her fellow City Commissioner Linda Morse, another person who nominated Reddi for the Elected Women of Excellence Award, Reddi’s many successes in leading the City of Manhattan have inspired other minorities to run for office.

One such partnership resulted in bringing dozens of highly skilled jobs to Manhattan, through the establishment of a new National Bio- and Agro-Defense Facility that studies the effects of disease and biological substances on farm animals. The lab is contributing to the nation’s ability to research, develop vaccines, diagnose diseases, and train veterinarians.

In addition, Commissioner Morse in nominating Reddi stated that she champions broad and diverse segments in and around Manhattan, including those involved in the justice system, the mentally ill, immigrants, victims of rape and sexual assault, and members of the LBGTQ+ community.

As mayor in 2016, she fought successfully to expand Manhattan’s non-discrimination ordinance to apply to everyone, regardless of sexual orientation and gender identity.

Another leader who nominated Reddi for the Elected Women of Excellence Award is Robbin Cole, Executive Director of Pawnee Mental Health in Pawnee County. Cole pointed to Reddi’s huge contribution to mental health in Manhattan and surrounding counties by contributing to the team that succeeded in bringing a mental health crisis stabilization center to Manhattan, an 11-bed short-term facility that opened in November 2019.

Since 2013, Cole noted, Reddi has served on the Board of Directors of the Kansas Chapter of the National Alliance on Mental Illness, and in 2017, Reddi was named Kansas NAMI’s Member of the Year.

On January 7, 2020, Reddi began her second year of duty as Mayor of her city, a position served during the four-year City Commissioner’s term that reflects that she won more votes than any other of the four commissioners, a remarkable success an East-Indian Hindu woman in Kansas.

She is the first Indian American to serve as mayor in Kansas, the first mayor of a city in Kansas to simultaneously run for a U.S. Senate seat, and the first woman of color ever to run for a seat representing the entire state.

Reddi declared her candidacy in the race for U.S. Senate in August 2019, after the retirement of Kansas Senator Pat Roberts. She believes that issues facing national government are the same basic tasks that Kansans: Health care, public education, and workforce needs, a problem related to sensible immigration policy.

Reddi received encouragement to join the Senate race from her family and those who know her success as mayor. She has lived in the United States since 1973, when her family immigrated from Andhra Pradesh, India. She became a citizen in 1987, and moved to Manhattan, KS, in 1992, where she raised her three children.

Her eldest, Ravi Kiran Reddi, works for a policy firm in New York, NY. Her second son, Srikanth Reddi, lives in Redondo Beach, CA, where he is finishing his Internal Medicine Residency at UCLA-Harbor Hospital. Her daughter, Santhi Reddi, lives in Indianapolis, IN, and recently became a licensed pediatrician.

An an educator, she won the 2004 Kansas Department of Education Horizon Award; the 2011 Manhattan-Ogden USD 383 Teacher of the Year; and the 2017 Susan M. Scott Award for Community Leadership from Kansas State University’s Staley School of Leadership.

Reddi also served as president of the National Education Association of Manhattan-Ogden USD 383, fighting for teacher benefits so other educators could better serve students.

For general campaign information, see https://ushareddi.com/issues, or contact the campaign at info@reddiforsenate.com.