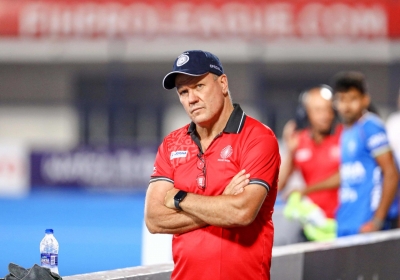 Bengaluru– The head coaches of the Indian men’s and women’s hockey teams have indicated that they would be looking forward to sending the best teams for the Commonwealth Games in Birmingham, beginning next month.

Till the time the Asian Games in Hangzhou got postponed, there was speculation that India would send its ‘B’ teams to the Commonwealth Games, but with the continental games not expected to take place this year, Hockey India can look forward to sending its best teams to Birmingham.

On Wednesday, India’s men’s team coach Graham Reid said that with less than two months to go for the CWG, his boys were looking forward to preparing in the best possible way for the quadrennial event, indicating the best players will be on board the flight to Birmingham.

“With a little less than two months for the CWG, we will utilise this time to ensure we are best prepared for the event (CWG). The Pro League matches will give us insights into the areas that require improvement ahead of the CWG.

“We will reconvene the national camp for CWG in the last week of June and we will have a good three weeks to prepare before the contingent leaves for Birmingham,” said Reid, who accompanied the Indian men’s team for Hockey 5s in Lausanne where they triumphed over Poland in the final.

The Indian men’s and women’s teams left for Europe on Wednesday morning, where they will play FIH Pro League matches in the final leg of the tournament.

Grouped in Pool B along with England, Canada, Ghana and Wales, the men’s team will begin their campaign in the Commonwealth Games on July 31 against Ghana followed by match against England on August 1. They will play Canada on August 3 and Wales on August 4 before the semifinals on August 6 and final on August 8.

Speaking about the upcoming FIH Pro League round of matches, Reid said, “There is an air of optimism among the players and doing well in Belgium and Netherlands will give us the right momentum ahead of the Commonwealth Games in July. With the Asia Cup team doing well too, our depth of players has only increased, making the team selection process for major tournaments all the more tough and interesting.”

While the men’s team will play against table toppers Netherlands and Belgium in the Pro League before the CWG, the women’s team will have a hectic lead up to the quadrennial games, with the FIH Women’s World Cup starting on July 1.

“The next few weeks are definitely going to be challenging and exciting as we play regular matches in June and July leading up to the CWG. Back-to-back Pro League matches will definitely give us the understanding of how the players’ bodies are reacting to recovery and being ready for a game within 24 hours,” said Janneke Schopman, chief coach of the women’s team.

In the Commonwealth Games, the Indian women’s team is grouped in Pool A with England, Ghana, Canada and Wales. They will play their first match against Ghana on July 29 followed by the match against Wales on July 30. In their third and fourth Pool A match on August 2 and 3, they will take on England and Canada respectively. The semifinal is scheduled for August 5, while the final is on August 7.

“Doing well at both, the Pro League and the World Cup is our immediate priority. The team in 2018 CWG finished fourth so definitely a podium finish is on the minds of the players,” added Schopman. (IANS)