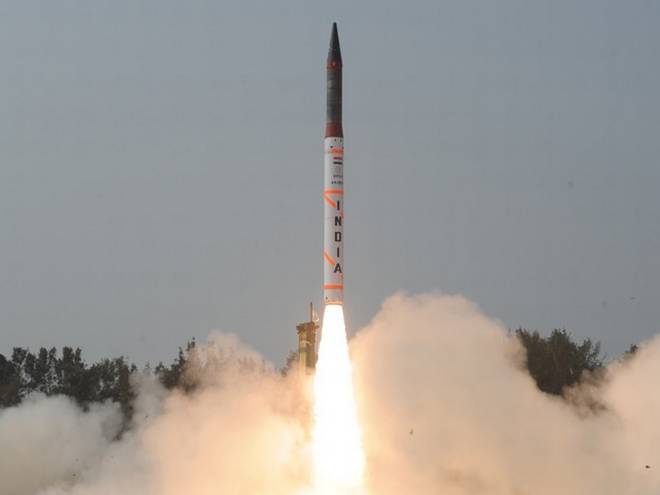 The launch came around 12 noon from a mobile launcher off the Balasore coast on the Abdul Kalam Island, an official statement said, terming the test “successful”.

“Agni-IV, the Long Range Surface to Surface Ballistic Missile with a range of 4,000 kms was successfully flight tested, once again proving the reliability and efficacy of the weapon system,” the statement said.

“All the radars, tracking systems and Range Stations have tracked and monitored the flight performance. All the mission objectives have been successfully met,” it said.

The launch operations were carried out by the Strategic Forces Command, part of India’s Nuclear Command Authority (NCA). It is responsible for the management and administration of the country’s tactical and strategic nuclear weapons stockpile.

This is sixth test of the missile and second user associate launch. The missile was earlier test fired in 2011, 2012 and twice in 2014. The last test took place in November 2015.

All tests have been successful, said the Defence Research and Development Organisation (DRDO), which has designed and developed the missile.

The two-stage solid-propelled, surface-to-surface ballistic missile was designed to carry a 1-tonne payload to a distance of 4,000 km.

The missile’s length is 20 metres and weighs 17 tonnes. It is equipped with state-of-the-art technologies, which include indigenously developed ring laser gyro and composite rocket motor.

Agni-IV is equipped with state-of-the-art avionics, 5th generation On Board Computer and distributed architecture. It has the latest features to correct and guide itself for in-flight disturbances.

Its re-entry heat shield is capable of withstanding high temperatures that may reach as high as 4,000 degree Celsius and above during re-entry of missile in earth’s atmosphere and makes sure that the avionics function normally, with inside temperature remaining less than 50 degree Celsius. (IANS)