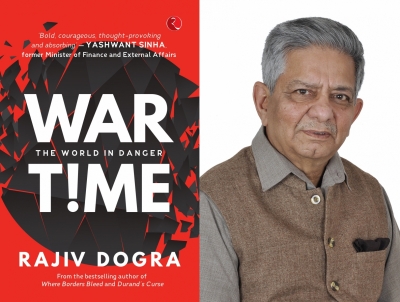 New Delhi– A “serious and growing asymmetrical relationship” with China, which has indulged in four instances of “salami slicing” along the un-demarcated border since 2012, and an increasingly bellicose and belligerent Pakistan means that India has to be prepared for a “single continuous war” along two fronts and not a two-front war — sans any assistance from the US or Russia, says a scholarly work by veteran diplomat Rajiv Dogra.

Dogra examines hotspots around the world through the prism of the principal stakeholders and concludes that “whichever path the world chooses in the difficult decade ahead, it should keep reminding itself that history is the consequence of its choices”.

“Since India no longer faces just unidirectional threats, it has to take a 360-degree view and prepare accordingly. Making the challenge dire is the fact that it is not a mere two-front war that India faces, but more likely a ‘single continuous war’ along two fronts. This war, when it happens, might stretch from one extremity of the Indo-Pak boundary to the other end of the Indo-China border,” Dogra writes in ‘War Time – The World In Danger’ (Rupa).

“In that case, India will have to contend with a ‘collaborative war’ that involves interoperability between China and Pakistan across the entire military spectrum. Such a war will be fought both in the deep seas and on the high Himalayas,” adds Dogra, who was India’s Ambassador to Italy, prior to which he served as Ambassador in Romania and as India’s last Consul General in Karachi.

Any willingness on India’s part to respond forcefully to China might be “welcomed” in the US, where successive administrations have sought to integrate India into America’s Indo-Pacific strategy but “this does not mean that the US will promptly jump into the fray”, Dogra writes, adding: “Therefore, when this war breaks out, India could well be reminded that the US has 47 treaty allies and it is not one of them.”

Noting that the nascent QUAD partnership “has yet to create its charter” and “languishes uncertainly” Dogra writes that President Joe Biden’s promise to transfer advanced technology, including submarine nuclear-propulsion to Australia under the AUKUS alliance “throws into stark relief India’s failure to acquire any significant high technology” from the US.

“All that India has to show for its ‘strategic partnership’ is the nearly $22 billion worth of military hardware purchased from US companies,” he writes.

Dogra is also harsh on the US for its “mercantile” manner of dealing with India.

“It becomes difficult to nurture such a relationship. But even if the US wishes to pursue a transactional relationship with India, it has to recognise the basic rule of transaction – that there are two parties to it. A relationship where only one side is expected to place high-value purchase order cannot, by definition, be termed transactional. As a result, doubts crop up and questions are raised by the Indian analysts: why did the US act so generously by transferring high technology and making huge investments in China? Why did the US lavish money and arms on Pakistan? In stark contrast, why is it so mercantile and demanding when it comes to dealing with India,” the author asks.

“So, can India ever be an equal friend with the US? It seems unlikely as long as the US remains vastly superior to it and as long as America’s approach to relationships is transactional,” Dogra maintains.

As for Russia, the wariness in its relationship with China was “papered over” by a mutual need in the last decade.

“After Russia annexed Crimea in 2014, the US, EU and Australia imposed sanctions on it. An unintended consequence of this decision was to turn Russia reflexively towards China. Over the next year, Russia struck a $400 billion deal for Gazprom to supply 38 billion cubic metres of gas annually to China. This energy supply arrangement is not the only result of the western sanctions. The trade between the two countries has increased from $64 billion in 2015 to $147 billion in 2021, making China the largest trading partner of Russia,” Dogra points out.

Russia, he writes, “has continued to feel threatened by the West as it had been during the Cold War and in the centuries before that. As a consequence, it has chosen to walk into the willing arms of China”.

Even today, there continue to be many in Russia who consider the Indian relationship to be precious, “yet, the last few years, India has let it slide”, the author notes.

“One indication that Russians are miffed about it is (President Vladimir) Putin’s steadily briefer visits during Indo-Russian summits. These are among other signals that all is not well with India’s relationship with Russia. Indo-Russian strategic linkages demand that these concerns should be quickly addressed, but India has been busy wooing the US,” Dogra writes.

In such a situation, with “no longer the assurance of a 1971-type of treaty with the Soviet Union to turn to in the time of need”, and with Russia and China “locked in an anti-America embrace, it leaves India in an uneasy position”, the author maintains.

Russia may be China’s “current brother but it has been India’s friend over decades. In war, it might steer clear of taking sides. Therefore, it may pass on a few critical items to India and intelligence information to China. Whatever the ultimate alliances and partnerships, the consequences of an Indo-China war will be bad enough, but with Pakistan joining in, it will be the stuff of nightmares for India,” Dogra writes.

What then, are India’s options? Dogra suggests a nine-point plan of action:

* India needs to upgrade military technology with the latest in AI, drones and electronic warfare.

* It needs to move away from its traditionally defensive approach because it is physically impossible for it to guard every inch of the over 6,800 km stretch of borders it shares with China and Pakistan.

* It must invest in gray zone operations in the enemy areas.

* It must adopt a whole of government approach in countering threats to its security.

* Increasingly, India will have to find responses to the ‘cognitive war’ tactics of its enemies in addition to the possibility of ‘no contact’ warfare and the use of unmanned platforms in war.

* There is no reason to expect that, in any future war with China and/or Pakistan, India will understand their nuclear Rubicon or that the Indian armed forces will not inadvertently cross one or more.

* India must lessen its economic dependence on China in critical sectors.

* The US has become an increasingly critical partner for India. But this dependence raises serious questions as to whether it actually enhances India’s strategic imperatives or if it opens up new vulnerabilities.

* India’s effort should be to create issue-based coalitions. It will have to work with other countries who feel threatened by the overwhelming preponderance of the two great powers and who fear their marginalisation in a world of contention and strife.

Happily, much of this is work in progress. (IANS)