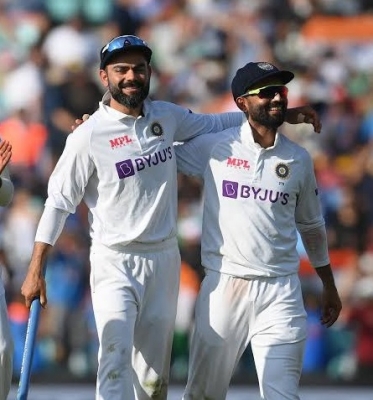 Mumbai– Star opener Rohit Sharma was on Wednesday named Team India’s ODI and T20I captain by the BCCI as the national cricket board announced the Test squad for their upcoming tour of South Africa, starting December 26.

Rohit will replace Virat Kohli, who stepped down as T20I captain after the ICC Men’s T20 World Cup, as the team’s limited-overs captain. Sharma recently led India in the T20I series against New Zealand at home immediately after the World Cup.

Notably, while announcing his decision to step down from T20 captaincy, Kohli had expressed his wish to continue leading the ODI side until the 2023 World Cup in India. However, the Chetan Sharma-led selection committee announced that Rohit will lead India’s ODI & T20I teams going forward.

“The All-India Senior Selection Committee also decided to name Mr Rohit Sharma as the Captain of the ODI & T20I teams going forward,” the BCCI said in a statement.

While Kohli will continue to lead the Test side, the 34-year old Sharma has also been elevated as the vice-captain in the longest format, replacing Ajinkya Rahane in the role. However, under-fire batter Ajinkya has managed to hold on to his spot in the 18-member India squad picked for their three-match ICC World Test Championship series in South Africa.

But, the experienced batsman is expected to face stiff competition for a place in the playing XI with the selectors also picking Shreyas Iyer and Hanuma Vihari. While Iyer recently impressed on debut, Vihari has been amongst the runs for India A in South Africa.

In absence of left-arm spinners Ravindra Jadeja and Axar Patel, Jayant Yadav has managed to hold onto his spot as the second spinner behind R Ashwin having played in Mumbai against New Zealand recently.

Pacers Jasprit Bumrah and Mohammed Shami, who were rested for the New Zealand series at home, return to lead the pace attack, which also has Umesh Yadav, Mohammed Siraj, Shardul Thakur. Ishant Sharma.

Suryakumar Yadav, who was in the Test squad for the last two assignments without getting a game, didn’t find a place in the suad. KS Bharat, who had filled in for the rested Rishabh Pant against New Zealand, has also been left out with the Delhi wicketkeeper-batsman making a return. KL Rahul, who was ruled out of the New Zealand Tests, is back alongside Shardul Thakur.

The side will play three Tests in South Africa, starting with the Boxing Day Test in Centurion on December 26, with the subsequent two matches set to be played in Johannesburg and Cape Town.