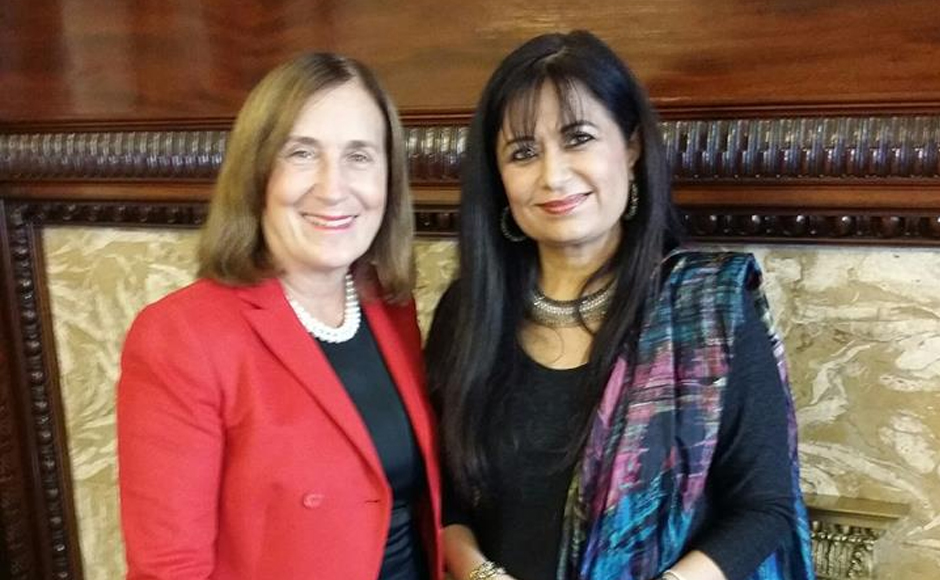 BOSTON—It was 1988, shortly after grocery giant Stop & Shop’s stock had plunged in the 1987 market crash. To fend off a hostile takeover by a corporate raider, the company went through a $1.23 billion leveraged buyout with Kohlberg Kravis Roberts & Co. By 1989, the Goldberg family, which had founded the company, was gone. It changed the course of life for Deb Goldberg who had been groomed to lead the company but she continued to dream big and subsequently followed her passion for politics.

She was first elected Selectman in the Town of Brookline and became its Chair. In 2014, she was elected as State Treasurer of Massachusetts and today is regarded as one of the top elected officials and politicians in New England. Click here to watch the interview.

She is a Democrat, and was elected when Republican Governor Charlie Baker swept the state polls in 2014. In an exclusive Chai with Manju interview filmed at State House in Boston, Goldberg talks about politics, role of women, financial education, wage inequality, her marriage, adopting her children, financial health of the Commonwealth and also gives some advice for working women and dealing with men in workforce. She also talks about her philosophy of life.

“I could do anything,” Goldberg recalled her mother telling her in childhood. She drilled that axiom into her head and still lives by that. In addition to being a successful politician, Goldberg says that she is a great dancer, loves Red Sox and is a passionate traveler.

Goldberg worked in the family-owned Stop & Shop till high school. She later served in different executive positions after attending law school at Boston College and receiving her MBA from Harvard. In addition to her full-time job as State Treasurer, Goldberg also serves as the President of Adoptions With Love and as an Advisory Board member of the Greater Boston Food Bank.