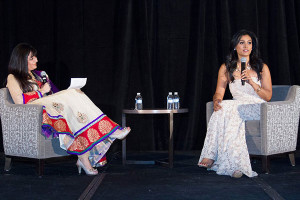 Nina Davuluri, born to Hindu Telugu parents in Syracuse, NY, made history as the first Indian American to become Miss America. Always an outstanding student, Davuluri entered the pageant world to pay for her education, and became the first Indian American to be crowned Miss New York in 2013, and later won the coveted national title Miss America 2014. Soon after Davuluri was crowned Miss America, she faced xenophobic and racist comments in various circles in the United States.

Davuluri was interviewed live on stage during the annual packed Akshya Patra fund raising dinner in Marriott Hotel in Cambridge, MA. During the interview, Davuluri answered a series of questions ranging from her experience as winning the pageant, to her traveling 20,000 miles per month and living out of two suitcases because of her busy travel schedule, to her struggle with weight gain and bulimia in college days. We would like to thank Desh Deshpande, Chairman of the Akshaya Patra Foundation USA, and Emily Rosenbaum, Chief Executive Officer of the Akshaya Patra Foundation, for inviting Chai with Manju to conduct the interview live.