BOSTON— Annette Philip is an Indian vocalist, pianist, composer and a recording artist. Currently, she is a faculty member of the Voice and Ensemble Departments at Berklee College of Music, as well as an ensemble director for Berklee’s Education outreach City Music Program. Philip is also the founder of Berklee’s first ever Indian Ensemble, currently one of the college’s largest and most diverse ensembles with over 50 members.

Philip is also a member of the Women of the World, an all-women music group born at Berklee. She and her WOW group will perform at Saheli-Boston fundraiser gala on Sept. 18 at Westin Hotel in Waltham, MA. The event will raise funds for Saheli, a non-profit community-based organization that is dedicated to empowering South Asian women and their families.

In an exclusive Chai with Manju Interview, Philip talks about her AR Rahman experience at Berkelee, Women of the World Group, her inspiration, family and her life.
To watch the interview, click here. 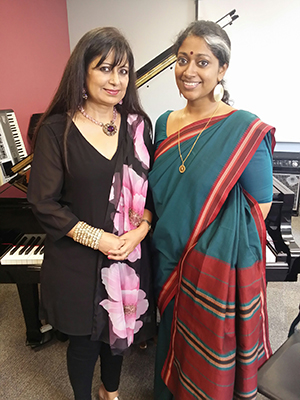 Philip, a Malyalee who grew up in New Delhi, said that she grew up with AR Rehman music as a soundtrack to her life and how exciting it was for her to host him at Berkelee recently.

While in New Delhi, in 2003 Philip co-founded Artistes Unlimited (AU), a performing arts ensemble, promoting collaboration among musicians in the city. With a vast repertoire spanning genres such as jazz, rock, R&B, funk, a-cappella, Gospel, Indian and Western Classical, Sufi and Indian folk music, AU soon became established as the premiere youth platform for independent musicians, with a rotating line up of over 250 artistes, according to her website.

At 17, Philip began working in the professional media circuit in New Delhi. She soon became an established recording artist, lending her voice to albums, jingles and voice-overs in nine languages, for television and radio. She also found inspiration in musical theatre; performing, writing, and recording for various productions in India.

After being awarded a full scholarship, Philip attended Berklee in Boston. She graduated in 2009 and received her degree in Professional Music, with courses providing an emphasis on improvisation, composition, and arranging.

She is also the artistic director of Berklee India Exchange (BIX), a program she co-founded with fellow Berklee Indian alum, Clint Valladares, and was instrumental in bringing AR Rahman to Berklee in October 2014.