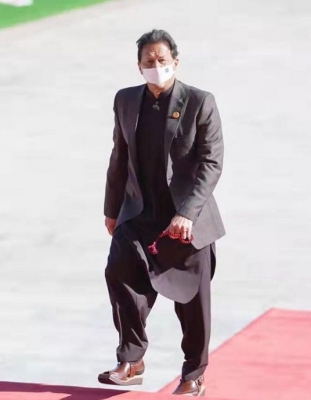 New Delhi– At a time when Russia has started military operations against Ukraine, Pakistan Prime Minister Imran Khan on Wednesday arrived in Moscow on a two-day official visit, Dawn reported.

The Prime Minister was greeted by Russian Deputy Foreign Minister Igor Morgulov upon his arrival and was also presented a guard of honour.

Khan is expected to meet President Vladimir Putin on Thursday.

The last Pakistani premier to visit Russia was Nawaz Sharif in March 1999, while former President Asif Ali Zardari came to Moscow in 2011.

As the Prime Minister has already played down the timing of the visit and any effect it would have on Pakistan’s relations with the West, there is a thinking that this visit is a double-edged sword and the government must tread with caution.

Pakistan National Security Adviser Moeed Yusuf, however, rejected the notion about the timing of the visit.

“Yes there is a global tension but our visit is of bilateral nature and the similar path was taken in the visit to China where economy, economic indicators and connectivity was at the heart of that tour,” he said.

Asked about Pakistan’s stance when the crisis deepens, he said his country’s message for Russia and the whole world was that it was not in any zero-sum game and there was no such (demand) from Kremlin as well.

That apparently clarifies the dust surrounding Khan’s visit but Thursday’s meeting and a joint declaration isn’t something that can be predicted, the report said.

The rising tensions over the Ukraine-Russia crisis have been brewing for more than two months, by now no effort has brought success to lessen the tensions, which are already putting country like Pakistan under immense pressure for several reasons.

Thursday will not be a random day for Khan to have a diplomatic speech as he is expected to be measured and calculated in his words. (IANS)