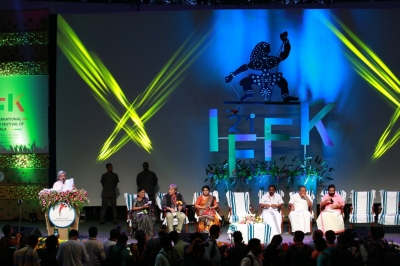 Thiruvananthapuram–In the backdrop of the Covid-19 pandemic, the silver jubilee edition of the International Film Festival of Kerala (IFFK) starting Wednesday will be a low key affair.

Necessary safety measures are being ensured by the Kerala State Chalachitra Academy (KSCA), which is organising the event. If not for the pandemic, IFFK would have been a grand affair, just like the previous years.

With Covid-19 continuing to rage in Kerala, every delegate and official taking part in the festival are being subjected to free antigen tests and only those testing negative are being allowed entry into the festival venues.

The delegates can also gain entry by producing a Covid negative certificate, issued not more than 48 hours prior to the entry. The theatres will also strictly adhere to all the Covid-19 protocols.

As many as 80 films from over 30 countries will be screened this year. Of the 14 films in international competition, two are Malayalam movies — Lijo Jose Pellissery’s ‘Churuli’, which is a world premiere, and Jayaraj’s ‘Hasyam’.

Kerala Chief Minister Pinarayi Vijayan will inaugurate the festival on Wednesday, followed by the screening of the Bosnian film, ‘Quo Vadis, Aida?’, an internationally co-produced war drama written and directed by Jasmila Zbanic.

Prominent guests from across the world are expected to join the festival online.

The five-day first phase of the festival will conclude on February 14. The four-venue concept had come under fire from certain quarters, but with the pandemic raging, it was decided to go ahead with the plan. The second phase of the festival will be held in Kochi from February 17-21, followed by Thalassery (February 23-27) and Palakkad (March 1-5).

At each venue, films will be screened in six movie halls and will have an audience limited to a maximum of 50 per cent of the capacity. (IANS)