IAGB will kick off this year’s India Day, which celebrates India’s 74th Independence Day, with a series of events—one of them being “India Day Learning Series”, a virtual event in collaboration with Shishu Bharti. Tha main India Day virtual event will be held on Aug. 15.

“This year keeping in mind the pandemic of Covid 19 and it’s subsequent social distancing rules we have had to modify our celebration of this important day for all Indian Americans. We are coming up with very unique and creative ways with multiple initiatives in a multi-week long celebration to commemorate this momentous day in a safe way following the ‘new norm’,” IAGB said in a statement. “One of our efforts is hosting a Virtual Series of classes aimed at educating our youth regarding the importance of this day.”

In collaboration with Shishu Bharti, IAGB is present a fun-filled, thoughtful, and educational insight into India’ s long journey from being a subjugated nation to a free nation.

“In this six-part virtual course, a group of passionate teachers from the Shishu Bharati School of Culture and Languages will explore this topic,” Lata Rao, IAGB Secretary, who leads the initiative, said in a statement. “The teachers will go through a timeline of the events through three centuries, describe the critical factors and important personalities at play; using a book list, You tube videos, and voluntary quizzes to supplement and illustrate the lessons.” 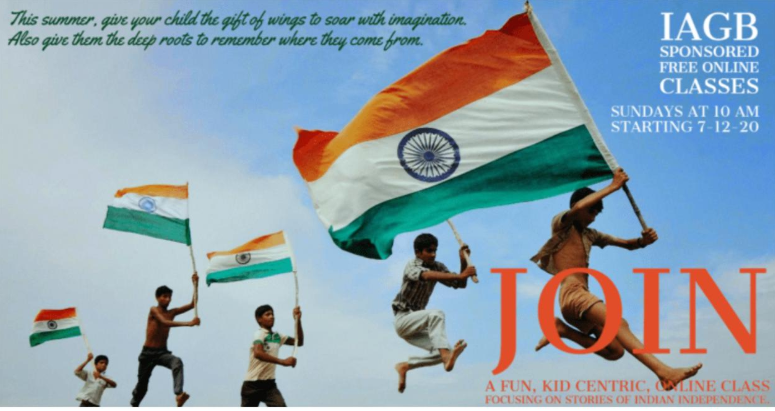 India gained its independence from the British on August 15th, 1947, after almost two hundred years of British rule. The British East India Company came to India in the 17th century to trade with a rich and prosperous India, created an Empire that lasted for two centuries, and then left an exploited and impoverished nation.

The resistance to British rule had an extremely violent phase in 1857, called the “Sepoy Mutiny” or the “First War of Indian Independence”, which led to crushing defeat. It took a decades long nonviolent movement, finally led by one of the greatest human beings in history, Mahatma Gandhi, to gain independence to further their rule, the British deepened religious divisions that led to a bloody partition into two countries at Independence. All Indians and those of Indian origin in the world are living with the legacy of this period.