“​IAFPE invites all Massachusetts based organizations​ ​and any other group ​who oppose hate, hate crimes, and racism regardless of membership ​race, color, religion, creed, sex, sexual orientation, gender identity, national origin, ancestry, and disability ​to sign-on and stand together as a coalition,” the statement said.

The panel discussion sought to address the recent wave of racially motivated hate crimes like the murder of Indian engineer Srinivas Kuchibhotla in Kansas. These hate crimes have raised alarm not only among Massachusetts based Indian American and South Asian communities, but all community members who feel that recent federal immigration reforms and executive orders are having a divisive impact on communities throughout the country and state.

Entitled “The Colors of the Commonwealth” the panel served as a call to action for concerned Massachusetts residents to come together and discuss effective community responses, strategies, and resources to combatting racism and hate crimes, including; civic education, reaching out to law enforcement and government officials, and social activism.

“On behalf of the Forum, thank you to all our program speakers and our audience for participating in an insightful conversation at Colors of the Commonwealth,” said IAFPE President Sonali Lappin. “We look forward to ensuring we reach out to and include all groups and their perspectives in the diversity of this coalition. We value your work and the experiences of your membership around hate crimes, racism, and educating community. This is just the beginning of many more conversations and events that will help foster dialogue and spark action.”

IAFPE Board of Trustees Chair Ramesh Advani expressed the sentiment by quoting reporter Chistiane Amanpour as saying that bad things happen and when good people do nothing. 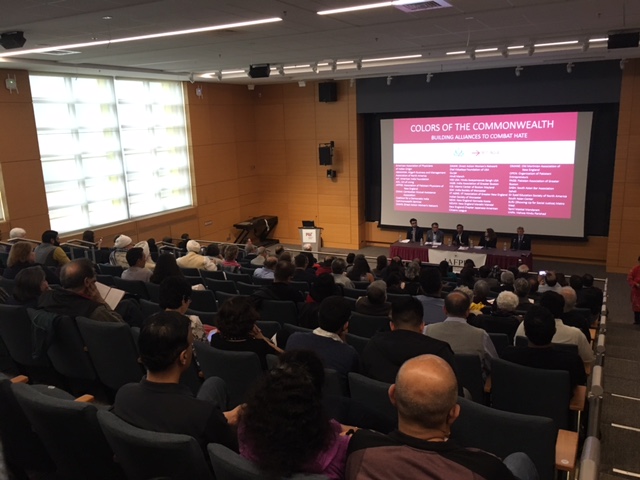 “As Chistiane Amanpour said, ‘Bad things happen when good people do nothing’. It is time we all unite to find common ground to address the many forms of bias and grievance that get directed against the other,” Advani said. “Indian Americans have made rich contributions to our nation of many colors and to this Commonwealth and should now step up to address these issues by working with all communities.”

MIT-India Managing Director Mala Ghosh said that the number of community organizations that came together for the program was inspiring and itself a motivating call to action.

“It was an honor to have the two MIT faculty Kenneth Oye and Vivek Bald frame the panel with a reminder of the South Asian and East Asian immigrant history and highlight patterns of hate crimes and public policy against not only Asian Americans, but other communities of color,” Ghosh said. “We must understand the history and the political context of the current climate as we try to connect beyond the Indian and Indian American community. We must look to partner across religious, national, ethnic, class, race, sexual orientation, gender, and generational differences in-order to build a powerful coalition against hate. I am excited to bring the MIT-South Asian community and network into this discussion.”

Poonam Ahluwalia, and attendee and director of Youth Trade, said she was inspired by the speakers and organizers to imagine a new future of collaboration.

“Most of all how young people of all backgrounds in the Commonwealth can come together under the leadership of Sonali Lappin to build a true coalition of caring members. We elders have a duty to support their leadership and innovative approach – the old ways have not delivered the results we need,”​ ​ Ahluwalia said in the statement.

Dr. Manju Sheth, an internist at Lahey Health, said Colors of Commonwealth was a much needed initiative for the community.​

“​It is not only brought the community together but also provided an open forum for a discussion about problems currently faced  by the Indian American community in the changing political scene,” Dr. Sheth said.  “I would like to congratulate IAFPE for this great initiative specially the new president, Sonali Lappin.​ ​It is such a pleasure to see that the event organizing team not only included senior members of community like Ramesh Advani, but was led by a young Indian American leader like Sonali. It will surely inspire the second generation of our community to be civically engaged and build strong bridge across communities. It is the only way to face and fight racial discrimination and become a truly inclusive society.”