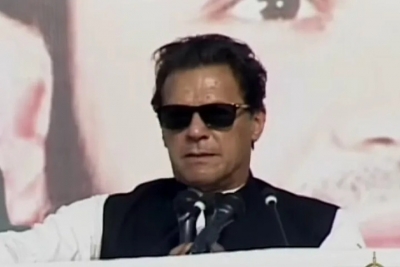 Islamabad– Pakistan Prime Minister Imran Khan has vowed not to bow down to the pressure that is being building on him to de-seat himself as the countrys premier, stating that he would never lay down his armory to the opposition parties, whom he called ‘corrupt’, ‘thieves’ and ‘frauds’.

Khan said the opposition is on a weak footing as all their cards have been exposed, while he still holds the trump card, which he said he will show a day ahead of the no-confidence motion.

“It would be someone’s delusion that I would resign and go home. Should I resign on the demand of thieves,” Khan asked.

“I am predicting that we will win the match of the no-confidence motion. People (allies and defected party members) often get unhappy with ruling parties,” he added.

Lambasting the opposition parties’ claims of having garnered the support of allies and defected members of the National assembly from the ruling party, the Pakistan Tehreek-e-Insaf (PTI), Khan said, “The opposition doesn’t even know how many people will it have left on the day of the no-trust move.”

“The politics of PPP (Pakistan Peoples Party) and PML-N (Pakistan Muslim Leagueï¿½Nawaz) revolves around concealing their theft. PPP’s Asif Ali Zardari’s ideology is money. Why would I sit with big criminals like Shehbaz Sharif,” he asked.

Khan also said that external elements are trying to defame the Pakistan Army amid the current political turmoil.

“A strong army is a pre-requisite for a strong country. Pakistan would have been split into three pieces had it not been for the army. The army should not be maligned for the sake of politics,” he said.

Khan’s confidence ahead of the March 25 session of the National Assembly, where a no-confidence motion against him is scheduled to be tabled, seems to indicate that his party has already formulated a strategy to extend the dates of the voting and use that time to engage with the defected members.

“The session of the National Assembly will be prorogued on the first day on account of the death of a lawmaker. The vote on the no-confidence motion could be held between March 30 and April 1,” said Sheikh Rasheed, the Federal Interior Minister.

Currently, Imran Khan’s premiership is struggling to convince the defected members of his party along with the allies, despite having backdoor meetings and consultations with them.

However, with some opposition parties putting forward their reservations and demands before the government, it is highly likely that the Imran Khan-led government will do what it can to fulfil their demands and push them away from the opposition support against the premier. (IANS)