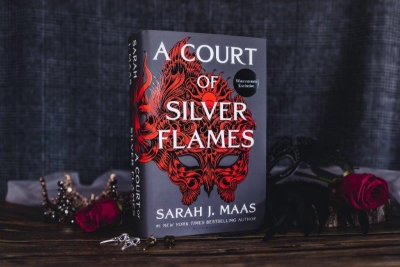 New Delhi– To celebrate the publication of the sequel to ‘A Court of Thorns and Roses’ (ACOTAR) titled ‘A Court of Silver Flames’, American author Sarah J. Maas was in a live conversation with Mumbai-based writer Deepanjana Pal at the 14th edition of the Jaipur Literature Festival(JLF). The author talked about the roller-coaster ride of actions and emotions that this book series has been.

Maas started writing the first book in the ACOTAR series after she had graduated from college in 2008. This was the time during which there was global recession. Being unable to find a job for 18 months, she immersed herself into writing. She remembers,”I poured a lot of my early doubts about the future into ‘A Court of Thorns and Roses’. The book was an escape from a rough and uncertain time in my life.”

After writing four best-selling books in the series, over a decade later, Sarah delved into the story of the headstrong Nesta, who was a minor but memorable character in the previous books in the series. She added,”I started writing Nesta’s story for fun. It was like fan fiction for my own work.”

But 768 pages later, as moderator and author Deepanjana Pal points out,”Nesta’s story will make a lot of readers feel seen.”

Already a New York Times bestseller within a week of its global release, the author was thrilled that her audiences loved the book as much as she does. “I see the book as a journey of healing and forgiveness, of self-love and self-discovery. It doesn’t have a happy ending but a happy beginning. It was joy for me to write ‘A Court of Silver Flames’.” (IANS)