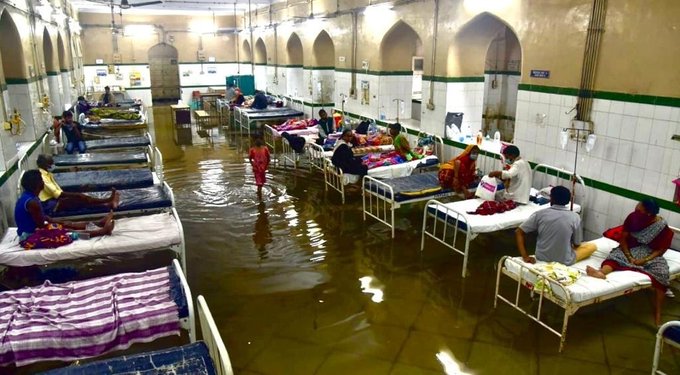 Hyderabad–Rain and drainage water entered into state-run Osmania General Hospital in Hyderabad on Wednesday, turning the oldest and one of the biggest healthcare facilities in Telangana into a cesspool.

It was a flood-like situation in the over a century old hospital with the employees struggling to prevent the water from entering the building.

With heavy rains lashing the city for a second consecutive day, water gushed into the historic building located on the banks of Musi river, flooding the corridors, alleyways and wards, causing severe inconvenience to patients.

Videos of water flowing into the hospital and washing away various articles and hospital staff trying to stem the flow went viral over social media.

Highlighting the pitiable condition of the government-run hospital and a heritage building, water entered into the in-patient wards. Patients and their attendants were sitting atop beds with ankle-deep water flooding the ward.

“This is the state of Osmania Govt Hospital now!! Corona Pandemic sweeping the city and look at waterlogging in one of the most well-known government hospitals in the heart of Hyderabad!! Reflecting the abysmal standards of KCR Administration,” tweeted Telangana Congress chief Uttam Kumar Reddy with a picture of a flooded ward.

“This is the state of affairs in Osmania Hospital, Hyderabad & our CM KCR is busy demolishing a functional secretariat and building a Nizam era palace. What an irony,” tweeted BJP leader Krishna Sagar Rao.

Public health activists say the situation at the hospital is getting from bad to worse. Authorities are not taking up repair works, resulting in the rain and even drainage water entering the building.

It was in 2015 that the Telangana Rashtra Samithi (TRS) government had proposed to demolish the building on the ground that it is structurally weak and unfit to run a regular hospital. It wanted to build two towers, of 24 floors each.

However, strong opposition from historians, heritage activists and prominent citizens forced the government to drop its plans to demolish the building.

Conceived after the Musi floods of 1908, the hospital was built by Mir Osman Ali Khan, the last Nizam of Hyderabad State and hence named after him.

Spread over 26.5 acres, the hospital has 11 major blocks. The inpatient block alone was over an area of 2.37 acres with a total bed capacity of 1,168 beds including 363 in super-speciality wards. (IANS)