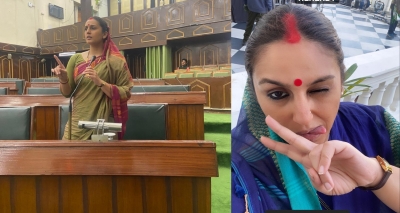 Mumbai–Actress Huma Qureshi has completed shooting for the second season of the award-winning web series ‘Maharani’.

The series was shot across Bhopal, Hoshangabad, and Jammu & Kashmir.

“Jammu was a short schedule but played a crucial role in the storyline nevertheless. It was such a beautiful place to shoot. Season 2 will be bigger with a lot of twists and turns,” said Huma.

The web series is a political thriller, created and written by Subhash Kapoor, directed by Karan Sharma.

The first season of the show that released on May 28 last year, also featured actors – Sohum Shah, Amit Sial, Kani Kusruti and Inaamulhaq.

The first season of the show is streaming on SonyLIV. (IANS)