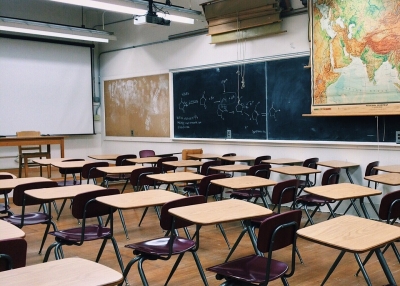 New York– With schools set to open in many places, researchers at the Massachusetts Institute of Technology (MIT) suggest that open windows and good heating, ventilation, and air conditioning (HVAC) systems can help keep the classrooms safe during the Covid-19 pandemic.

The study also shows how specific classroom configurations may affect air quality and necessitate additional measures, beyond HVAC use or open windows, to reduce the spread of aerosols — those tiny, potentially Covid-carrying particles that can stay suspended in the air for hours.

“There are sets of conditions where we found clearly there’s a problem, and when you look at the predicted concentration of aerosols around other people in the room, in some cases it was much higher than what the (standard) models would say,” said Leon Glicksman, an MIT architecture and engineering professor.

One ideal scenario involves fresh air entering a classroom near ground level and moving steadily higher, until it exits the room through ceiling vents. This process is aided by the fact that hot air rises, and people’s body warmth naturally generates rising “heat plumes,” which carry air toward ceiling vents, at the rate of about 0.15 meters per second.

Given ceiling ventilation, then, the aim is to create upward vertical air movement to cycle air out of the room, while limiting horizontal air movement, which spreads aerosols among seated students.

This is why wearing masks indoors makes sense, Glicksman said. Masks limit the horizontal speed of exhaled aerosols, keeping those particles near heat plumes so the aerosols rise vertically, as the researchers observed in their simulations. Normal exhaling creates aerosol speeds of 1 metre per second, and coughing creates still higher speeds — but masks keep that speed low.

But, with closed windows and HVAC use, airflow problems emerged in a simulated classroom in winter, with cold windows on the side. In this case, because the cold air near the windows naturally sinks, it disrupts the overall upward flow of classroom air, despite people’s heat plumes.

In this scenario, someone infected with Covid-19 sitting near a window would be particularly likely to spread their aerosols around. But there are fixes for this problem: Among other things, placing heaters near cold windows limits their impact on classroom airflow, Glicksman said. (IANS)